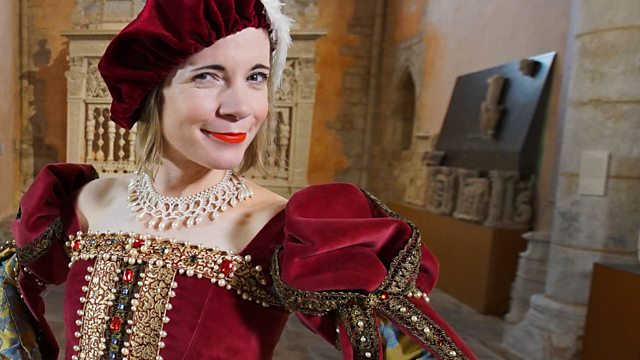 In this festive treat featuring the Kingdom Choir and Hampton Court Choir, Lucy Worsley reveals that there’s much more to our best-loved carols than meets the eye. She reveals how their stories add up to a special kind of history of Christmas itself. In the ancient past, the wassail, a pagan fertility ritual, gave us door-to-door carol singing. Wassailing was also an integral part of an older midwinter festival that was adopted by Christianity when it came to Britain, and was rebranded as ‘Christmas’.

Religion, however, soon turned its back on carols. They were far too frivolous for the Puritans, who wanted to ban Christmas altogether. French Catholics on the other hand didn’t mind fun and frolics, and Lucy crosses the channel to learn a French renaissance jig, written by a dancing priest in the 16th century. The tune she dances to went on to become the carol Ding Dong Merrily on High in the 19th century.

In strict Protestant Britain, the carol survived outside the Church and new ones turned up in some surprising places. Lucy visits the British Library, where she discovers an 18th-century children’s book that contains a little memory game called The Twelve Days of Christmas. Christmas carols could also be politically dangerous and subversive. British Catholics were oppressed for generations after the Reformation, but one Catholic scribe, John Francis Wade, hid a coded message of support for a Jacobite rebellion in the carol O Come All Ye Faithful.

Eventually, the Church of England couldn’t resist the power of the carol, and finally opened its doors to all of them, thanks to a chance pairing of words and music in Hark the Herald Angels Sing, performed in the programme by the renowned gospel ensemble, The Kingdom Choir. In the 20th century, Ralph Vaughan Williams’s passion for English folk music took him to the villages of Surrey. Here, Lucy meets a folk singer who tells the tale of an elderly farm labourer, Henry Garman, who sang a tune for Vaughan Williams, which became O Little Town of Bethlehem.

Finally, in the snowy Austrian Alps, Lucy discovers the simple story of a young parish priest with a poem in search of a tune. When he found one, the result was Silent Night. During the First World War, this simple carol would become a hymn for peace during the famous Christmas truce of 1914. Silent Night also reminds us that carols are, and have always been, ‘popular music’, music for the people, fulfilling an enduring need to celebrate and sing together at Christmas.