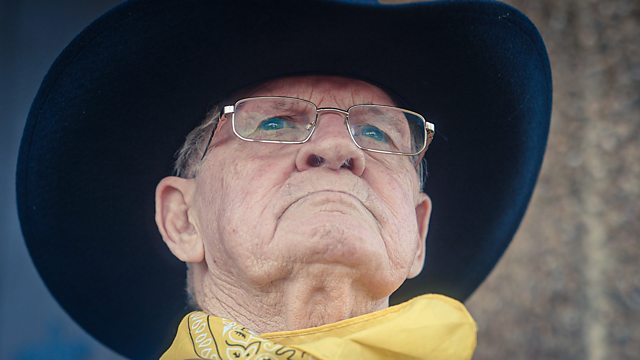 Forget the spaghetti western, here is the deep-fried western. The story of a posse of 1970s Falkirk factory workers who pooled their wages to make cowboy films in their spare time.

Nearly 50 years ago, in the unlikely setting of the British Aluminium plant in Falkirk, a group of around 20 workers put aside 15p a week from their wages to fund their other lives as film-makers. The Falkirk Cowboys tells the story of those men, their town and the impact of the films they made.

This posse of factory-working moviemakers called themselves the BA Cowboys. They were led by a fork lift driver-turned amateur film director called Rab Harvey, whose love of westerns proved so infectious that he corralled enough co-workers together to make a series of increasingly ambitious amateur films.

Rab, Jock and a few others shot a homemade western called The Lawless Breed. The initial reaction of the workers at the plant was one of amusement. But on seeing the film, opinions changed. Rab Harvey asked his co-worker Denis McCourtney to lasso in a few extra people and the BA Cowboys were born. Their films had all the trademarks of the classic western, though with a definite Falkirk slant.

The Cowboys’ series of increasingly ambitious films not only capture something of their time, but also communicate the creativity, fun and camaraderie within the group. The men worked long shifts in monotonous jobs and the films provided them with an arena where they could let their imaginations run free. Inspired by westerns they had seen in the cinema and on TV during their childhoods, their film titles included Border Badmen, Apache Ambush and Showdown.

Shooting on a shoestring budget and often filming in a day, they turned Falkirk’s Callander Park into a western backdrop, learned to ride the horses they hired for the shoots from a local stable, and with a bit of help from fellow factory workers and family members, made their own props and costumes - the gun holsters were made from ladies handbags picked up at jumble sales or occasionally around the house!

Screened at makeshift cinemas inside the factory’s own social club as well as at local community halls and old folks’ homes in Falkirk, the films weren't only popular because there was no charge to get in. The Cowboys started to make collections at the screenings for various charities and raised enough to buy five battery-operated wheelchairs.

The Cowboys coincided with a time of economic growth for Falkirk, whose workers were known as The Men of Metal. However, as industry in Falkirk declined, so did the fortunes of the BA Cowboys. A redundancy process took a proportion of the group away from the factory, and horror film The Mummy’s Hand - their most adventurous work, evoking the deserts of Egypt in an old quarry and the sand bunker at the local golf course - proved to be their final film.

Almost five decades have passed since the Cowboys last rode out together. Some of the Cowboys and some of the films themselves have been lost in the intervening years, but star of Apache Ambush Denis McCourtney is still with us to remember his wild western past, Alex Penman digs out his old tomahawk to reminisce about playing an Indian, and Ian Gardiner recalls being buried alive for his Boris Karloff-inspired turn as the Mummy.

The Falkirk Cowboys sees the surviving films shown in a real cinema for the very first time. And as the remaining Cowboys’ car pulls up to drop them at the foot of Bo’ness Hippodrome’s red carpet for a gala screening of their old films, there is a surprise or two awaiting them.

The Falkirk Cowboys tells a tale of friendship, industrial communities in Scotland, creativity, cinema and a social history of Falkirk across 50 years.

See all clips from The Falkirk Cowboys (2)