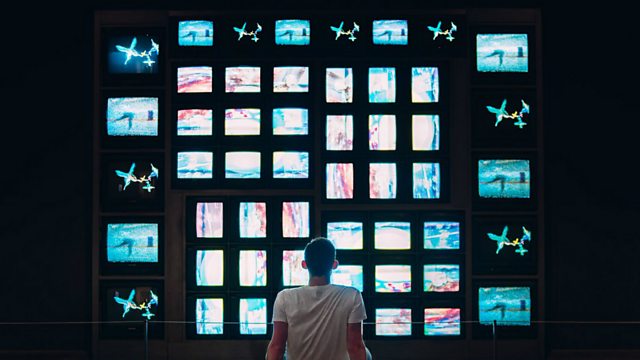 When TV & the information superhighway were new

Nam June Paik made art with TV sets and imagined an information superhighway before the internet was invented. John Giorno organised multi-media and dial-a-poem events.

Nam June Paik made art with TV sets and imagined an information superhighway before the internet was invented. John Giorno organised multi-media and dial-a-poem events. Poet and New Generation Thinker Sarah Jackson joins Matthew Sweet to look at the visions of the future conjured up by these artists who were both interested in the influence of mass media and Buddhism. She's joined by artist Haroon Mirza and Tate curator Achim Borchardt-Hume. We dial a poet Vahni Capildeo and hear from Vytautus Landbergis, former Lithuanian Head of State, former comrade of Nam June Paik.

Haroon Mirza's work is on show in an exhibition called Waves and Forms at the John Hansard Gallery in Southampton until January 11th 2020.
Vahni Capildeo's most recent collection is called Skin Can Hold.
Sarah Jackson's poety collection is called Pelt. You can hear Sarah Jackson exploring the human voice in a short feature if you look up this programme called New Generation Thinkers: Edmund Richardson and Sarah Jackson https://www.bbc.co.uk/programmes/p05pspzx
and Sarah Jackson delivers a short talk about the history of the telephone in a programme called The Essay Telephone Terrors
https://www.bbc.co.uk/programmes/b07wrlf4