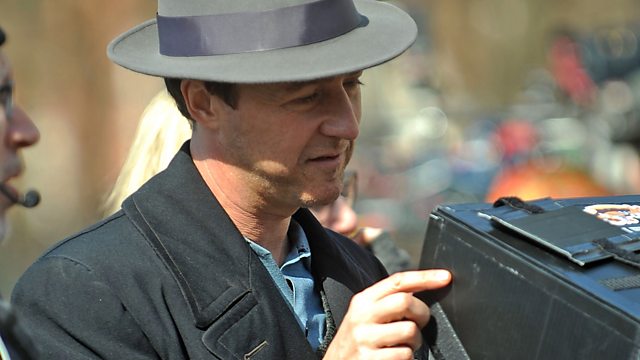 Edward Norton on his new film Motherless Brooklyn, review of the TV adaption of Elizabeth is Missing, art from Bristol Zoo and Midnight Movie at the Royal Court

Edward Norton on his new film Motherless Brooklyn, which he wrote, directed, produced and stars in, as a lonely private detective with Tourette Syndrome in 1950s New York. The film also stars Bruce Willis, Gugu Mbatha-Raw, Alec Baldwin and Willem Dafoe, and is based on Jonathan Lethem's 1999 novel.

Bristol–based artist Luke Jerram discusses his latest artwork, Extinction Bell, which he hopes will help raise awareness of the issue of biodiversity loss. The bell will toll once, 150-200 times a day, at random intervals, indicating the estimated number of species lost worldwide every 24 hours. It will tour to a number of different venues including museums of natural history, botanic gardens and zoos, and its first location is Bristol Zoo Gardens.

Elizabeth is Missing is adapted from Emma Healey's bestselling 2014 novel and stars Glenda Jackson as Maud – a woman struggling with dementia who attempts to piece together what has happened to her best friend. Raifa Rafiq reviews.

Midnight Movie is a new play by Eve Leigh which combines British Sign Language, captioning, audio description and the spoken word and opens at the Royal Court this week with Nadia Nadarajah and Tom Penn. Samira Ahmed talks to the play’s director Rachel Bagshaw about the way in which the play explores the impact of the digital revolution on disabled people and the issues that face disabled practitioners working in theatre.

The Boy in the Dress, Turner Prize Shortlisted Artists, The First Nowell

Image to the left: Gugu Mbatha-Raw and Edward Norton  in Motherless Brooklyn

Elizabeth is Missing starring Glenda Jackson is on BBC One at 9.00pm on 08 December 2019, and on the BBC iPlayer.

Midnight Movie is at the Royal Court Theatre, London until 21 December 2019.