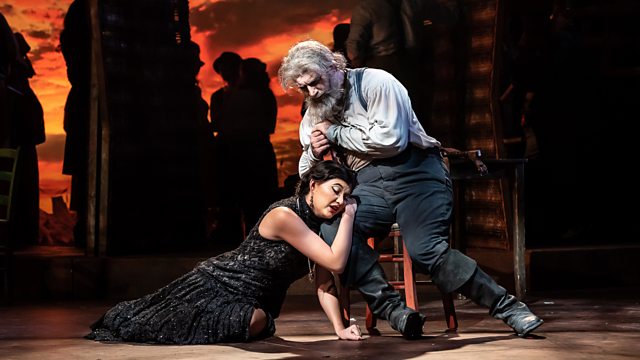 From Wexford Festival Opera, Jules Massenet's last true masterpiece, Don Quichotte, with the bass Goderdzi Janelidze in the title role as the half-crazy, ageing, self-proclaimed knight-errant dreamer, and the raising star mezzo-soprano Aigul Akhmetshina as his love interest, the young and fair Dulcinee. It's based on the Cervantes evergreen novel, a sardonic look at the old-fashioned chivalry romances of yesteryear. Massenet turned it into a delicious comédie-héroïque portraying this unique world in a witty and at the same time sad, and ultimately deeply humane caricature.
Presented by Sean Rafferty with commentary by the 19th-Century opera expert Flora Willson.

From the Met - Philip Glass's Akhnaten

A festival is being celebrated. Four hopeful admirers of Dulcinée serenade her from the street. Dulcinée appears and explains philosophically that being adored is not enough, ‘Quand la femme a vingt ans’ (‘When a woman is twenty’). She withdraws and a crowd, largely of beggars, acclaims the arrival of the eccentric knight Don Quichotte (riding on his horse Rossinante) and his comic squire Sancho Panza (on a donkey). Delighted by their attention, Don Quichotte tells a reluctant Sancho to throw them money.

After the crowd disperses, Don Quichotte himself serenades Dulcinée, ‘Quand apparaissent les étoiles’ (‘When the stars begin to shine’) but he is stopped by Juan, a jealous admirer of the local beauty. A sword fight follows, interrupted by Dulcinée herself. She is charmed by Don Quichotte’s antique attentions, chides Juan for his jealousy and sends him away. The old man offers her his devotion and a castle. She suggests instead that he might retrieve a pearl necklace of hers stolen by Ténébrun, the bandit chief. He undertakes to do so, and Dulcinée quickly rejoins her men friends.

A misty morning, Don Quichotte and Sancho enter with Rossinante and the donkey. Don Quichotte is composing a love poem. Sancho delivers a grand tirade against their expedition, against Dulcinée, and against women in general. ‘Comment peut-on penser du bien de ces coquines’ (‘How can anyone think anything good of those hussies’). The mists disperse revealing a line of windmills that Don Quichotte takes for a group of giants. To Sancho’s horror, Don Quichotte attacks the first one, only to be caught up in one of the sails and hoisted up in the air.

Dusk, Don Quichotte believes they are getting close to the bandits. Sancho goes to sleep while Don Quichotte stands guard. The bandits suddenly appear and after a brief fight take the knight prisoner. Sancho escapes. Surprised by the defiance of the old man, the bandits give him a beating and intend to kill him, however Don Quichotte’s prayer ‘Seigneur, reçois mon âme, elle n’est pas méchante’ (‘Lord receive my soul, it is not evil’) moves Ténébrun, the bandit chief, to mercy. Don Quichotte explains his mission ‘Je suis le chevalier errant’ (‘I am the Knight-errant’), and the necklace is returned to him. The bandits ask for the blessing of the noble knight before he leaves.

Music and dancing, a party is in progress, but Dulcinée is melancholy, ‘Lorsque le temps d’amour a fui’ (‘When the time of love has gone’). Rousing herself, she snatches a guitar and sings ‘Ne pensons qu’au plaisir d’aimer’ (‘Think just of the pleasures of love’). All retire to dinner. Sancho and Don Quichotte arrive. While waiting for Dulcinée, Sancho asks for his reward to which Don Quichotte responds with vague promises of an island, a castle, riches. Dulcinée and her party greet the knight and he returns the necklace to universal acclaim. However, when he asks her to marry him he is greeted with hysterical laughter. Taking pity, Dulcinée tells the others to leave, apologises ‘Oui, je souffre votre tristesse, et j’ai vraiment chagrin à vous désemparer’ (‘I share your sorrow and am truly sorry’) but explains that her destiny, her way of life, is different from his. She kisses him on the forehead and leaves. But the company returns to make fun of the old man. Sancho vigorously upbraids them, ‘Riez, allez, riez du pauvre idéologue’ (‘Laugh, laugh at this poor idealist’) and takes his master away.

Don Quichotte is dying. He remembers once promising Sancho an island as his reward, and offers him an isle of dreams, ‘Prends cette île’ (‘Take that isle’). Nearing death, Don Quichotte looks up at a star shining brightly above and hears the voice of Dulcinée calling him to another world. Then he collapses as Sancho weeps over his body.