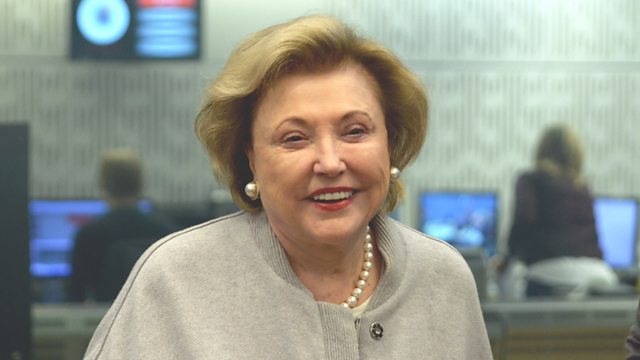 Aasmah Mir and Richard Coles are joined by Barbara Taylor Bradford who has just published her 37th book. Age 15 she started in the typing pool for a newspaper and was in Fleet Street as a reporter age 20. She published her first novel, A Woman of Substance, in 1979 and has sold 90 million books world wide.
Also in the studio is David Loftus, who is a lone identical twin whose brother John died shortly after their 24th birthday. At the start of 2018 he set himself the challenge of writing a daily memoir reflecting on the events of just over 30 years ago leading up to his brother’s tragic death.
Brenda Edwards is with us - she finally realised her dream of performing on the stage by entering the X factor in her mid 30s and is now appearing on the West End
and Simon Yates who, during a climb up the Siula Grande in the Peruvian Andes, infamously cut the rope of his climbing partner Joe Simpson as depicted in the book, film and now play, Touching the Void.
As well as your thank yous, we have the inheritance tracks of conductor and violinist Andre Rieu who chooses Sphärenklänge by Josef Strauss and What a Wonderful World performed by Louis Armstrong.
Producer: Corinna Jones
Editor: Eleanor Garland