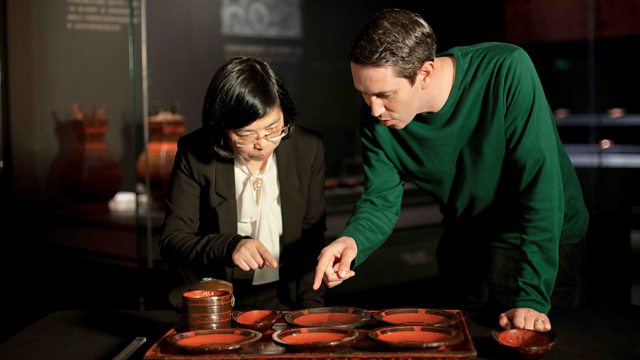 In the last episode of the series, BBC art critic Alastair Sooke studies the art, tradition and ceremony of Chinese food.

In China's Greatest Treasures, BBC art critic, Alastair Sooke travels through modern day China to discover that much of what defines Chinese culture today can be traced back through thousands of years to some of China's most spectacular historic artefacts housed in museum collections across the country. In the last episode of the series, BBC Art Critic Alastair Sooke investigates food.

From the busiest food market in Asia, to one of the best-known legends in Chinese history, Alastair studies the art, tradition and ceremony of Chinese food. He returns to the Forbidden City, in modern Beijing, to explore the enormous carved jade figure of King Yu who mythically tamed flooding rivers, allowing ancient Chinese farmers to sow their crops and feed their communities. Alastair travels to the southern city of Changsha to prepare a feast, inspired by ingredients found in a 2000-year-old tomb. And he's in the Yangtze River Delta where archaeologists have discovered a ancient hydraulic system used to mass produce rice over 5000 years ago.

The Art of Technology