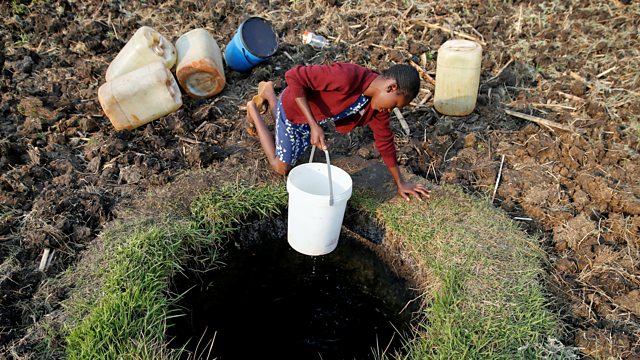 The political elite blame the drought for Zimbabwe's current misery, but that simply won't wash says Stephen Sackur. Kate Adie introduces this and other international stories.

It’s now two years since Robert Mugabe was pushed out of office by the military and replaced by Emerson Mnangagwa. For many Zimbabweans economic conditions- already dire - have actually got worse. Now to add to their misery, there are water shortages and alarming evidence of the negative effect of climate change. But corruption and mismanagement have contributed to the power crisis and evening blackouts - it is no good just blaming the drought says Stephen Sackur.

When the Buddha stipulated the rules for monks, he said each should only have a few possessions; an alms bowl, a water bottle, robes, a needle and thread and a razor. But now in Cambodia, within the folds of these saffron robes, there’s often a smartphone too says Sophia Smith Galer.

Saudi Arabia is experiencing genuine social change - with woman ripping off their scarves at football matches, but there are still big questions over the man leading the process, Crown Prince Mohamed Bin Salman says Sebastian Usher.

Nearly half a century after a university uprising which led to the fall of the military junta, Katy Fallon is in Athens and finds policies by Greece’s new centre right government have led to fresh clashes between students and police.

And Hugh Schofield takes us to a bizarre French micro state in a castle in southern Germany - a bolt hole for Nazi collaborators at the end of World War 2.

“If we burn you burn with us”