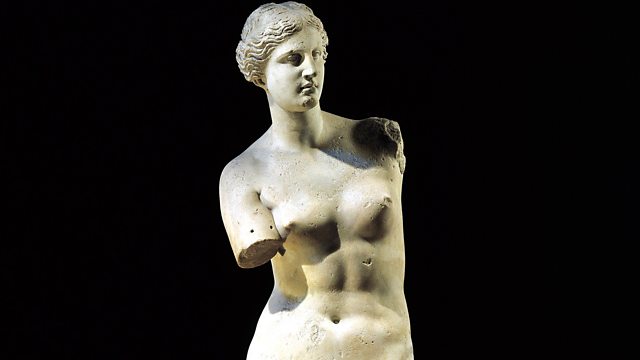 Classicist Bettany Hughes has traced the history of the goddess known as Venus or Aphrodite. Originally depicted with a phallus on her head, Venus was later drawn and sculpted as a beautiful naked woman. Hughes tells Andrew Marr why this powerful deity of love was thought to corrupt and to inspire.

Tenor Mark Padmore depicts the irrationality of desire in Benjamin Britten's Death in Venice. He plays the lead role in the Royal Opera House's new production, based on Thomas Mann's novella, in which a burnt-out writer succumbs to obsessive love. Britten wrote the main part for his partner, Peter Pears, with whom he lived through decades of homophobia.

Unconscious desires and strange fantasies play out in the work of Dora Maar, one of the great Surrealist artists. Emma Lewis has curated an exhibition of Maar's photography and paintings, revealing an artist whose striking imagery rivalled that of her more famous lover, Picasso.

Historian of philosophy Clare Carlisle discusses the Dutch philosopher Baruch Spinoza, one of the first thinkers to interrogate our emotional life. George Eliot translated his 17th-century masterpiece, the Ethics, into English. Eliot also 'translated' his ideas into literary form. Her novel Middlemarch draws on Spinoza's ideas about human flourishing and love, shown through different happy and unhappy marriages.

Bettany Hughes is an award-winning historian, author and broadcaster.  Bettany is also a Research Fellow of King's College London, a Tutor at Cambridge University’s Institute for Continuing Education and a Visiting Professor of History at the New College of the Humanities.

Venus & Aphrodite: History of a Goddess is published by Weidenfeld & Nicolson.

The tenor Mark Padmore has established an international career in opera, concert and recital. His appearances in Bach Passions have gained particular notice.  Mark is also Artistic Director of the St. Endellion Summer Music Festival in Cornwall.

Death in Venice is at the Royal Opera House until 6th December.

Clare Carlisle is Reader in Philosophy and Theology at King's College London and a regular contributor to the Times Literary Supplement.

Spinoza’s Ethics, translated by George Eliot and introduced by Clare Carlisle, is out in January.

Emma Lewis is Assistant Curator, Tate Modern and curator of the Tate presentation of Dora Maar. Emma works across exhibitions, displays and researches photography acquisitions for the permanent collection.

Dora Maar is at Tate Modern until 15th March.