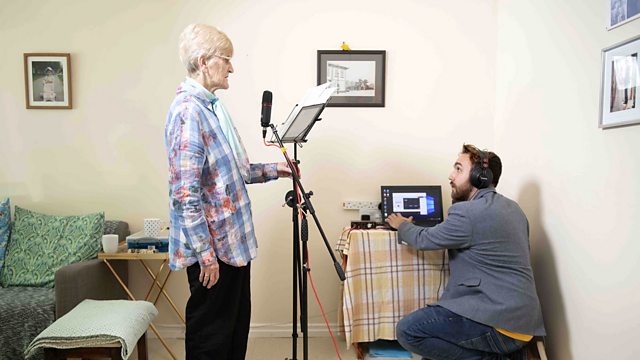 An adaptation of Sean Edwards' play Refrain, a poetic exploration of place, class and politics, performed by his mother Lily Edwards.

An adaptation of Sean Edwards' play Refrain, a poetic exploration of place, class and politics, performed by his mother Lily Edwards.

In 2019 the artist Sean Edwards represented Wales at the Venice Biennale.

His exhibition, in a de-consecrated church, was a poetic reflection on his childhood growing up on a housing estate in Cardiff.

It consisted of sculpture, video, textiles and photographs.

And, also, every afternoon at 2 o clock: a radio play -- called Refrain -- performed live each day by his mother Lily.

So -- if they timed it right -- as visitors made their way around the old church they would be joined by the presence of Lily -- her unembellished voice, broadcast directly from her council flat in the Welsh capital.

This programme is a reimagining of Refrain, setting the mosaic of memories, quotations and official documents against two different soundworlds -- an estate in Cardiff and the renaissance skyline of Venice.