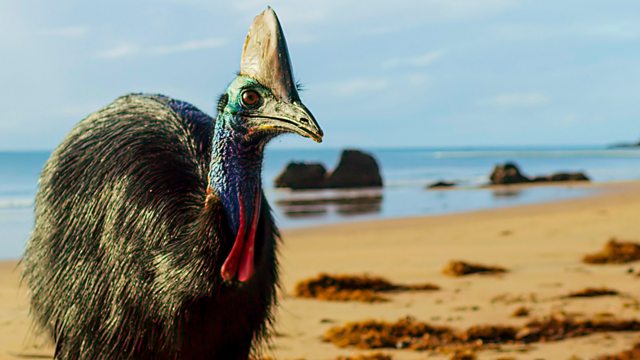 Australia, a land cast adrift at the time of the dinosaurs. Isolated for millions of years, the weird and wonderful animals marooned here are like nowhere else on Earth.

Australia, a land cast adrift at the time of the dinosaurs. Isolated for millions of years, the weird and wonderful animals marooned here are like nowhere else on Earth. In the north of this island continent is the Daintree, one of the world’s oldest tropical forests. It’s home to the most dangerous bird on earth - the cassowary. A dinosaur-like bird standing 6 feet tall, they are formidable but their success is down to how well a father cassowary can carefully protect his tiny stripy chicks. Inland the continent is full of more surprises. The wombat, a tough short-legged marsupial, roams Australia’s mountain ranges surviving freezing snowstorms. In the hot gum tree forests is a newly discovered predator with a bizarre courtship ritual. And on the wide, open grasslands the dingo, Australia’s elusive and much persecuted wild dog, hunts kangaroos to provide food for its pups. Chases can cover many miles and are often unsuccessful. Life in Australia is tough and it’s getting tougher. Since its isolation the continent has been rapidly drifting north, getting hotter and drier – turning the forests and grasslands to dust. Over 70% of Australia is now arid land. In the sun scorched red centre, reptiles rule the desert. Giant perentie lizards patrol the dusty land in search of smaller lizards to eat and weird thorny devils drink using only their skin. At watering holes, huge flocks of wild budgerigars bring a splash of bright colour. This Island continent now lies so far north it is surrounded by warm, clear tropical waters - and here coral reefs thrive. They are home to a kaleidoscope of tiny colourful fish and the largest number of shark species in the world. Once every 10 years or more, thousands of sharks gather creating an amazing spectacle. But Australia’s animals face a challenge as a result of humans. More species of mammals have been lost here than anywhere else on the planet. An extensive site containing thousands of extraordinary ancient carvings is all that remains of some.
But on a secret offshore island, the enigmatic and rare Tasmaian devil, a pugnacious marsupial predator, has one of its last strongholds.

See all clips from Australia (7) 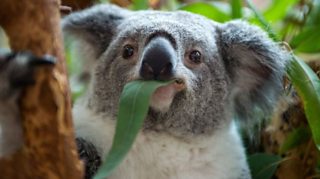 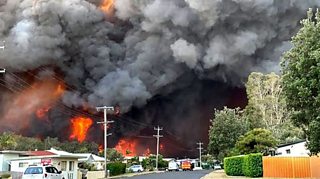 Is climate change to blame for Australia's bushfires?