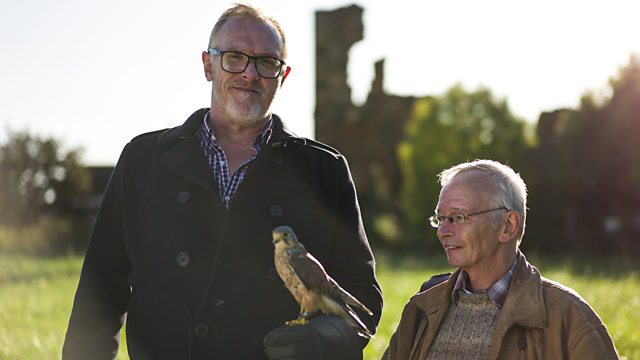 Comedian, actor and ex-English teacher Greg Davies is a lifelong fan of Barry Hines's classic novel A Kestrel for a Knave, the story of Billy Casper training a kestrel as an escape from his troubled home and school life. In this documentary, Greg goes in search of the book's enduring appeal, travelling to Barnsley, where the book was set and where Ken Loach's famous adaptation, Kes, was filmed.

In a series of encounters with Barry Hines's friends and family, collaborators and admirers, Greg offers a warm, funny and poignant tribute to a book that gave a unique voice to the working-class experience and, in Billy Casper, created a young rebel whose story continues to connect with readers more than 50 years after it was first published in 1968.

In the fish and chip shop young Billy visits in Kes, now renamed Caspers, Greg meets Dai Bradley who played Billy Casper. Together they wonder what might have become of him. 'I think he would have kept that fighting spirit,' says Dai. 'There’s a lot of kids like him out there and the message of the book is that we need to find ways to harness that energy.'

Greg also meets members of the local community in the working men's club, where Barry was a regular, and discovers how many characters in the book were inspired by the people he met there, including the notorious PE teacher.

Ken Loach explains why the book provided such perfect source material for the film. 'The truth of the book shone through: the comedy, the use of language and dialect and, of course, the central image of a boy who is trapped, training a bird that flies free.'

Greg visits the site where Barry Hines's brother, Richard, found his own kestrel, the encounter that inspired the character of Billy and the location used in the film. For the first time in 50 years, Richard flies a kestrel again.

In the Sheffield University archives, Greg is thrilled to discover the original handwritten manuscript of A Kestrel for a Knave. There he meets Jarvis Cocker, another fan of the book, who discusses why the book meant so much to him 'That symbolism of escape was powerful for me growing up,' says Jarvis. 'The desire for escape has been a massive engine for creativity for people from working-class backgrounds. You want to make, write or sing something to help you escape.'

See all clips from Greg Davies: Looking for Kes (3)