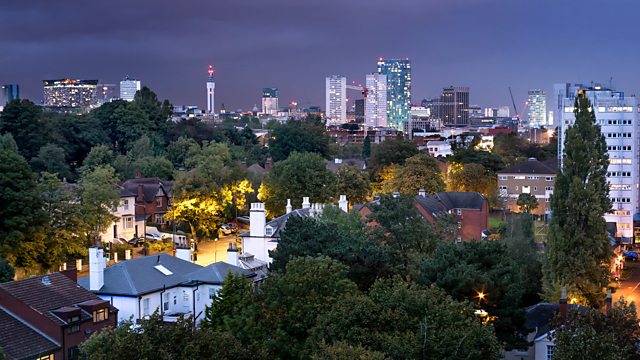 A portrait of a writing day in Birmingham. With specially composed verse by Gregory Leadbetter.

A portrait of 24 hours of writing in Birmingham

Writing begins in Birmingham in the suburb of Oldbury at 5am every day when writer William Gallagher makes a dawn beginning on his latest screenplay or podcast script. By 8am, Mike Gayle is at his desk in Harborne ready for a morning of editing his latest novel. And at 09:30, poet Liz Berry joins Birmingham’s writing day over in the leafy suburb of Moseley to work on her latest collection of poems about motherhood.

A mile away, in Kings Heath, novelist Catherine O'Flynn starts work on her children’s novel at 10:30. At the other end of Kings Heath High Street, novelist Helen Cross takes up the writing baton at lunchtime and works steadily through the afternoon until the kids get home from school.

Birmingham pauses to eat in the early evening before writing begins again, this time over in the far suburb of Dorridge where Professor Chris McCabe has finished his day job in his laboratory and, by 8 in the evening, is busy at work on his latest crime thriller. Chris finishes around 10pm but playwrights Tom Davis and Deirdre Burton don’t start writing until midnight. They sit by the fire writing plays together until 2:30am in Moseley.

In the wee hours in Harborne, insomniac poet Vidyan Ravinthiran is disturbed by his new-born baby and gets up to revise his latest verse - and so he completes Birmingham’s writing day.

A Must Try Softer production for BBC Radio 4