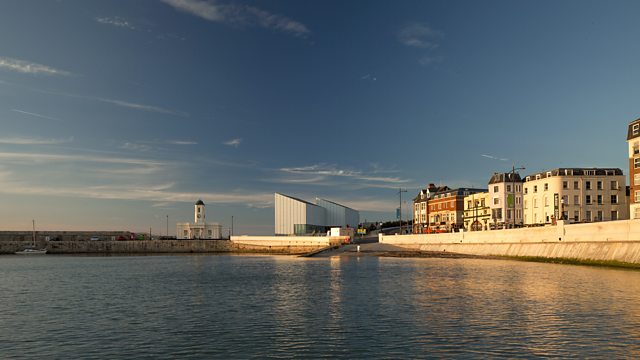 Philip Dodd discusses the Turner Contemporary, regeneration and gentrification, the 2019 Turner Prize exhibition, writer Maggie Gee on her novel Blood and the town in literature.

The seaside town of Margate has both struggled and thrived over the past two centuries – it thronged with holidaymakers from the Victorian era onwards but limped through the latter half of the 20th century and was one of the most deprived parts of the UK before the £17.5m Turner Contemporary opened in 2011. Many hoped that the new art gallery would spearhead change and eight years on there has clearly been growth – the town sometimes jokingly referred to as Shoreditch-on-Sea has been through a wave of gentrification, complete with the common trappings of independent cafés, vintage shops and yoga studios, frequented by an ever-growing artistic community bolstered by regular arrivals of Londoners fleeing the capital. Tourist numbers are up, with the Dreamland amusement park reopening and over 3.2m visitors to the Turner Contemporary reported since its launch. This narrative of a successful arts-led regeneration however ignores that fact that Margate remains in the top 1% of deprived communities in the country and in some wards around half of all children live in poverty. The painter JMW Turner once remarked of Margate that it had the ‘loveliest’ skies in Europe, but can they brighten prospects for the local community, as well as for the artists that flock there?

As this year’s Turner Prize comes to Margate for the first time, Philip Dodd looks at whether the arts are a successful driver of regeneration, with Turner Contemporary Director Victoria Pomery and the social artist Dan Thompson, who has looked at people, place and change throughout his career.

We reflect on the Turner Prize exhibition itself, and the work of shortlisted artists Lawrence Abu Hamdan, Helen Cammock, Oscar Murillo and Tai Shani. The exhibition runs at Turner Contemporary until January 12th and the winner is announced on December 3rd.

The author Maggie Gee’s new novel Blood is set in Margate and the surrounding area of Thanet. A darkly comic crime thriller set in Brexit Britain East Kent where the political atmosphere bleeds into the action. Her imposing protagonist Monica is accused of murdering the tyrannical patriarch of her family – a situation complicated by the fact she’s armed with an axe ready to do just that, when she finds her father’s body. Maggie tells us about Blood and how the local area is a perfect canvas for the story.

Margate is hosting several events as part of Being Human, the UK’s national festival of the humanities which runs from November 14th to the 23rd – you can find more information on their website https://beinghumanfestival.org/

Literary historian Professor Carolyn Oulton is hosting a Murder Mystery trail in Margate for Being Human, amongst other things, and has been studying seaside towns in literature during the railway age. She gives us a view of Margate from the Victorian era – a bustling, promiscuous, populist place full of tourists – and the kind of stories set there. Crime and romance reads for the beach did particularly well for the holiday market, with works like Love in a Mist and Death in a Deckchair key tomes in the Margate canon.

George Eliot's Mill on the Floss