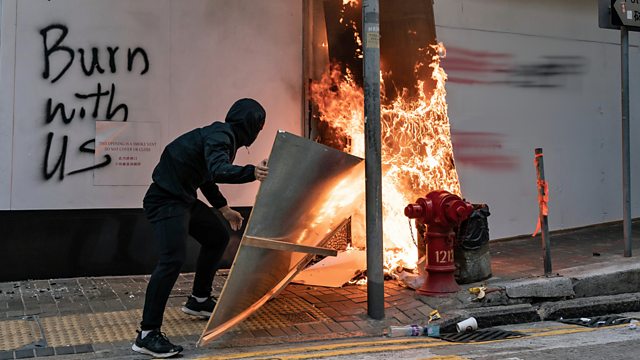 “If we burn you burn with us”

The protestors who believe they are fighting for Hong Kong’s very existence. Kate Adie introduces this and other stories from around the world.

They believe they are fighting for their way of life, for Hong Kong’s very existence, but the protestors know they can’t really win says Paul Adams.

Kate Adie introduces this and other stories from around the world:

There is a saying in Russia “If he beats you - he loves you” hears Lucy Ash as she visits a refuge for the survivors of domestic violence in Moscow. “Twisted logic, yes, but it is still part of our mentality.”

In Ethiopia, Justin Rowlatt gets stung by killer bees as he examines successful attempts to re-green the region and restore long lost woodlands.

In Australia, bushfires burn. While scientists and firefighters agree that climate change is making things worse many leading politicians refuse to listen. Phil Mercer has seen the damage for himself.

And Joanna Robertson struggles to get a decent haircut in Paris and asks who is to blame?

A 'wow' moment in Latin America