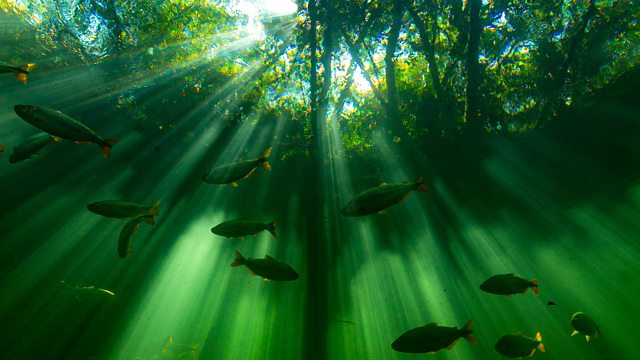 South America - the most species-rich continent on earth. From the volcanoes of the Andes to the world’s largest rainforest, animals here must specialise to carve out a niche.

South America - the most species-rich continent on earth. From the bone-dry deserts of the Atacama, where penguins weave their way through a minefield of snapping sea lions, to the lush cloud forests of the Andes, where Andean bears scale 30-metre trees in search of elusive fruits, South America is full of the unusual and ingenious.

In the far south of the continent, predators prowl the jagged Patagonian landscape. Underneath vertical spires of rock, a mother puma must draw on all her experience and strength to bring down a formidable prey. Guanaco, a relative of the camel, are three times her weight and able to fling a puma in the air.

East of the Andes lies the world’s largest rainforest - the Amazon. To stand out from the crowd here, male blue manakins have developed elaborate and comical dance routines. Poison dart frogs have unique ways to protect their young. Fathers carry their tadpoles piggy-back style to individual pockets of water throughout the forest, but must remember where they hid each one. Precious clay-licks attract rainbow-coloured flocks of macaws and butterflies, all desperate to lap up the precious salts.

In southern Brazil, freshwater springs bubble up crystal clear. Piraputanga fish cruise through the turquoise waters following capuchin monkeys feeding overhead. Fruit dropped by the primates makes an easy meal for the fish until giant anacondas send the monkeys scrambling for safety. The hungry fish resort to leaping athletically from the water, snatching fruit directly from the branches.

The rainforests of South America are under threat. A few small patches of Colombian forest are the last remaining refuge of one of the world’s rarest monkeys. Cotton-top tamarins flit through the treetops hunting down insects, a wild shock of white hair on the top of their heads.

Great dusky swifts fly dangerously close to the spectacular Iguazu falls - then mysteriously disappear. They nest behind the mighty wall of water, safe from predators, but this leaves the chicks in a precarious position. To survive their maiden flight they must somehow punch through the world’s most powerful waterfalls.

See all clips from South America (7)