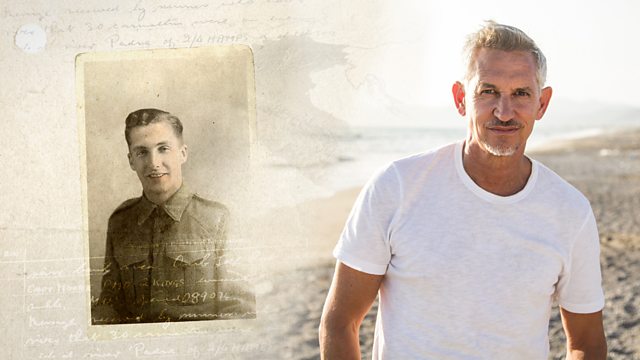 Gary Lineker follows in the footsteps of his late grandad, Stanley Abbs, to explore a brutal but often overlooked chapter of the Second World War.

Presenter Gary Lineker follows in the footsteps of his late grandad, Stanley Abbs, to explore a brutal but often overlooked chapter of the Second World War.

Gary knows that Stanley served in Italy in the Royal Army Medical Corps, but knows little more because, although they were close, his grandad never talked to him about that time. To discover the true story behind his grandfather’s war experiences and to better understand why the British were fighting there, Gary travels to Italy.

Using the official war diary kept by Stanley’s unit as a guide, Gary revisits the places where his grandad was stationed and meets experts who help him piece together what happened to his grandfather during the Italian campaign. Along his journey Gary also meets veterans who share poignant first-hand testimony and help him to understand the unremitting reality of combat in Italy.

Gary has also heard that despite their heroism the soldiers in Italy came to be called the ‘D-Day Dodgers’ and he wants to know why. As Gary finds out about the huge sacrifices made and how much the veterans endured, he is determined to make sure that they, as well as his grandfather, receive the recognition they deserve and that their huge contribution is never forgotten.

See all clips from Gary Lineker: My Grandad's War (3)