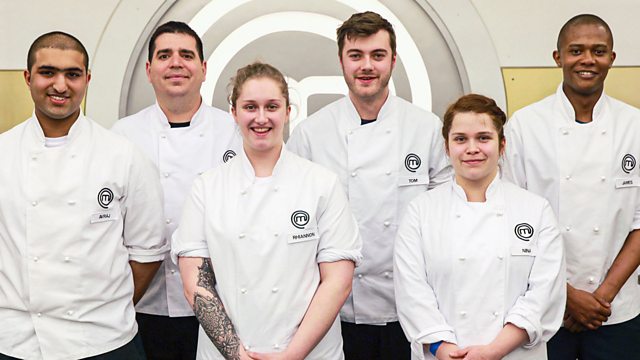 MasterChef: The Professionals Series 12
Episode 5 of 21

In the second heat of the week, three contestants are given 15 minutes by Marcus to prep and cook his calves' liver with a bordelaise sauce.

Celebrated MasterChef presenter Gregg Wallace, reputed chef Monica Galetti and Michelin-starred Marcus Wareing are together once again in their search for the UK's finest cooking talent.

It is the second heat of the week, and six more of the UK's most determined chefs make the journey to the MasterChef kitchen, ready to fight for the coveted title. Ahead of them are two challenges designed to assess their ability in the kitchen - from taste and technical flair, to creativity and ability to work under pressure. These chefs' every move is watched over by Monica, Marcus and Gregg. At the end of the heat, only the three best chefs will go through to the quarter-final.

First up is the skills test. Tonight, three chefs face the terrifying prospect of cooking an elegant dish at Monica's request. They have 15 minutes to perfectly prep and cook razor clams with a shallot, caper and tomato sauce. If the chefs haven't ever tackled a razor clam, they need to dig into their repertoire of shellfish cookery to conjure up a dish to wow the judges.

The next three contestants have been given 15 minutes by Marcus to prep and cook his calves' liver with a bordelaise sauce. Timings, texture and taste are key to making this dish a delight, not a disaster.

In the next round, it is down to all six chefs to come back in and win over the judges with a dish of their own design. They have a chance to save face after any earlier mishaps when they cook their own signature dish for Monica, Marcus and Gregg. In an hour and 15 minutes, they must inspire the judges with their creativity, flavours and personal style. It is their chance to claim some culinary kudos before the judges decide which three are sent home, and which three go through to this week's quarter-final.