BBC Two
The Name of the Rose
Main content 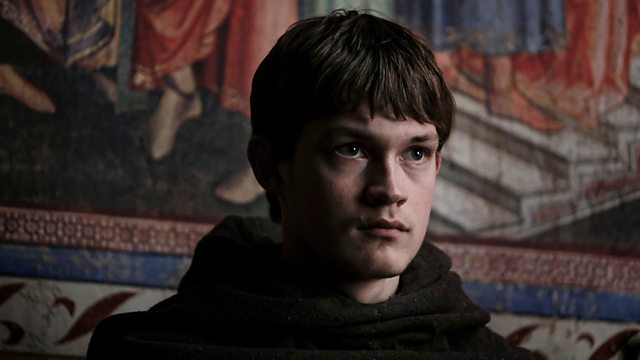 The Name of the Rose Series 1
Episode 5 of 8

The grand inquisitor presents the abbot with a precious gift from the pope. Anna is found wounded and unconscious in the woods by the Occitan girl, who tends to her injuries.

The abbot welcomes the delegates to the conference with a lavish supper arranged by the cellerer Remigio. The grand inquisitor Bernard Gui tells the assembled guests that he must concern himself with the sad events at the abbey, which stink of the devil. Bernard asks to be introduced to William's novice Adso and takes a particular interest when told he is German, believing him to be a spy sent by the emperor.

Salvatore warns Remigio that they should flee, since he is certain that Gui has recognised Remigio. But Remigio cannot believe that Gui would have noticed such a lowly figure as himself. In the woods outside the abbey, the Occitan girl tends to the wounded Anna and is visited by Adso. The conference descends into a brawl, with both sides' delegates insulting each other with taunts. Adso confesses to William that he has had carnal relations with a girl.

See all episodes from The Name of the Rose