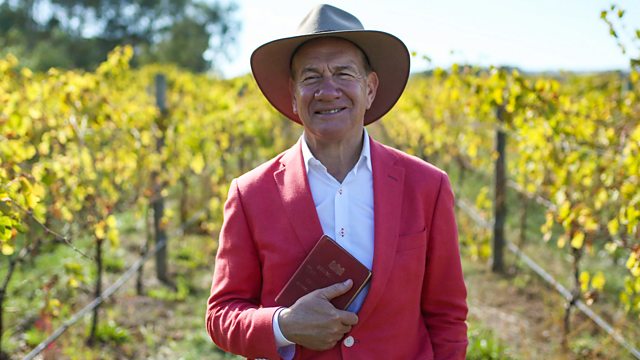 Adelaide to Perth: The Indian Pacific

Michael Portillo rides the Indian Pacific Railway, which stretches from Adelaide, South Australia, 1,700 miles deep into the desert, to the gold rush town of Kalgoorlie, before finishing in Perth.

Michael Portillo embarks on a rail adventure aboard the transcontinental Indian Pacific Railway, which stretches from the southern port city of Adelaide, South Australia, 1,700 miles deep into the desert, to the gold rush town of Kalgoorlie, before finishing in Perth, Western Australia.

First, Michael explores McLaren Vale, where an enterprising early 19th century Briton with a murky past began to grow vines. Michael enjoys the fruits of his labours and hears his story from his great great great granddaughter.

Boarding the mighty Indian Pacific, Michael embraces the luxury of a previous age as he travels across Australia's notoriously remote and inhospitable Nullarbor Plain. He discovers the 100-year-old history behind the ambitious line and the tremendous feat of engineering it took to deliver it. In the ghost town of Cook, Michael helps to top up the train's water and is rewarded with dinner under the stars at Rawlinna. He strikes gold in one of the most lucrative goldfields in the world and strikes it lucky in the traditional Australian gambling game of 'Two Up'.

He pays a flying visit to the doctor to hear how patients in remote Western Australia are cared for, then takes to the skies to admire Perth, one of the world's most isolated cities, and its port of Fremantle. South of the city, in Pinjarra, he uncovers a dark chapter in the histories of both Britain and Australia – a child migration programme devised at the time of Michael’s Bradshaw's Guide.

Back in Perth, Michael hears how Edward VIII was caught up in a train accident near Bridgetown and is invited to an Aussie barbie.