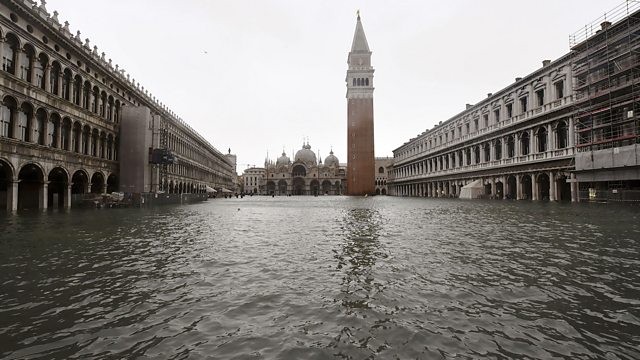 The damage flooding does to art, and how floods have been portrayed; the art being created for the new medical galleries at the Science Museum; musician Tom Roshenthal performs

With Italy set to declare a state of national emergency in Venice after the Unesco world heritage site was engulfed by a 6ft 'acqua alta', flooding its historic basilica and many other sites of great historic interest, art critic Jonathan Jones discusses the cultural significance of the imminent threat from flood and fire and what is being done to protect the city’s invaluable architectural and artistic heritage. And John Wilson talks to artist Katie Paterson about the metaphorical representation of environmental disasters in art and the responsibility amongst artists in raising awareness of current climatical concerns.

On Saturday the world’s largest galleries devoted to the history of medicine open at the Science Museum in London. Surprisingly, perhaps, there is a lot of art involved in medicine, with imaginatively-designed sculptural devices and equipment. Major new artworks have been commissioned for the new galleries too. John Wilson talks to the artists Marc Quinn, Studio Roso and Eleanor Crook, as well as Sir Ian Blatchford, the Science Museum’s director.

Tom Rosenthal is the musician whose songs are used on the new Radio 4 podcast Tunnel 29, the extraordinary true story of the escape tunnel dug under the Berlin Wall in 1962. Tom performs How This Came To Be live and discusses building a successful pop career outside of the mainstream music industry.

Tobias Menzies plays Prince Philip; Six, a musical about the wives of Henry VIII; and Rapman

Main image above: St Mark's Square, Venice after the flood on 13 November 2019.

Courtesy of the Artist and Ingleby, Edinburgh

The Wellcome Galleries at the Science Museum, London, open on 16 November 2019.

Image: Marc Quinn's statue The Self-Conscious Gene in the Medicine and Bodies Gallery

The album Z-Sides by Tom Rosenthal  is available now.

Tom Rosenthal's songs are featured at the end of the Tunnel 29 podcast.