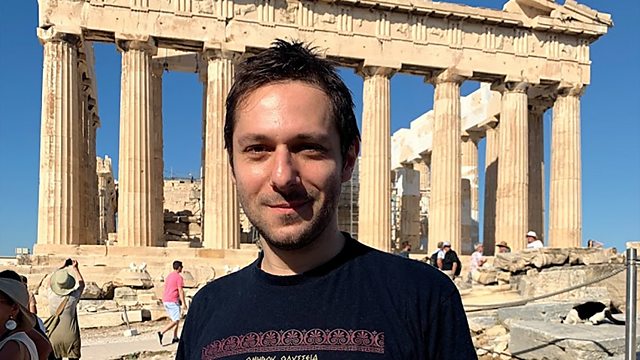 Could an Ancient Athenian Fix Britain?
Episode 4 of 5

Comedian and classicist Jon Harvey investigates how classical Athens kept their politicians in check, and how they brought miscreants to book. Could we learn from them?

Comedian and classicist Jon Harvey, explores modern British democracy through an ancient Athenian lens. If the one thing we can all agree on is that our state is in a state, could the world’s original democrats help us right the ship?

Democracy was born in ancient Athens and lasted for nearly 200 years. Not all Athenians were democrats - perhaps the most famously outspoken anti-democrat Socrates ended up sentenced to death, ironically by a vote of the people. But if an Athenian democrat time-travelled to 2019, what would he make of what's going on in Britain? Jon investigates how classical Athens kept their politicians in check, and how they brought miscreants to book. Can we learn from them?

Jon is a politician of sorts, having recently challenged Boris Johnson at the general election as his alien alter-ego Count Binface.

Episode 3: How much is too much?

See all episodes from Could an Ancient Athenian Fix Britain?