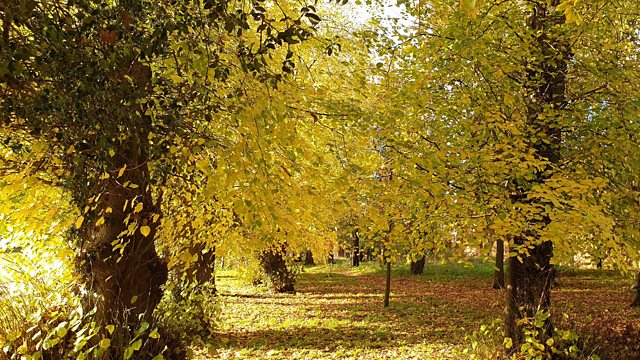 The Susurrations of Trees

Thomas Hardy wrote that people could identify a tree by its susurration, the sound of leaves in the wind. Writer Bob Gilbert listens and hears how poets and musicians capture this

"To dwellers in a wood almost every species of tree has its voice as well as its feature. At the passing of the breeze the fir-trees sob and moan no less distinctly than they rock; the holly whistles as it battles with itself; the ash hisses amid its quiverings; the beech rustles while its flat boughs rise and fall..." That's the opening of Thomas Hardy's novel, 'Under the Greenwood Tree'.

Producer Julian May and Bob Gilbert, author of 'Ghost Trees' (about the trees of East London, the poplars of Poplar and beyond), are fascinated by the rustles of leaves in the breeze. They capture the distinctive susurrations of several species: quivering poplars, aspens that sound like rain, rattling London planes, whispering elms (there are still elms, they spring up, but the beetles bringing Dutch elm disease get them before they can mature) the hiss of the ash, whooshing pines and the strangely silent yew. They test Hardy's contention with Matthew Steinman and Ian Rogers, arboriculturalists who care for the trees of the Royal Parks.

They are intrigued by the words coined for these sounds - the learned - psithurism- from the Greek meaning whispering, to the local - 'hooi' the New Forest word for wind in the trees. The poet Alison Brackenbury reveals how John Clare, especially, has conjured them in language with vibrant dialect words, brustling, for instance. They explore the way writers such as Hardy, Edward Thomas, Francis Kilvert have responded to these sounds.

Musicians too have been inspired, there's Liszt's 'Forest Murmurs'; Iris Dement sings 'Whispering Pines'. There is new music composed especially for the programme by Lisa Knapp who incorporates the sounds of leaves in her violin piece.