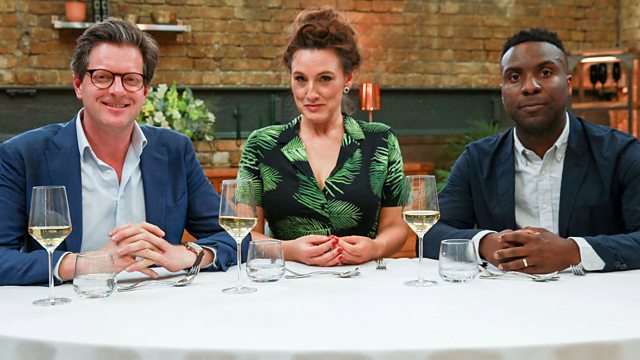 MasterChef: The Professionals Series 12
Episode 3 of 21

In the first quarter-final, the six strongest chefs from the first two heats are challenged to an invention test centred around a staple from every kitchen around the world - rice.

Michelin-starred Marcus Wareing and reputed chef Monica Galetti and are side by side in their search for the UK’s finest cooking talent.

In the first quarter-final, the six strongest chefs from the first two heats aim to impress Monica and Marcus in two high-stakes challenges. First, the chefs are challenged to an invention test centred around the judges' chosen ingredient. This week, Marcus selects a staple from every kitchen around the world - rice. The chefs are under pressure to elevate this humble ingredient and create a dish with impact. Along with a whole range of other ingredients to choose from, the six chefs must deliver one plate of food that puts rice firmly at the forefront. With ten minutes to select the ingredients and 70 minutes to cook, there is a lot riding on this plate. Only the four strongest contestants will go on to the next challenge - to cook for the restaurant critics and for two chefs, it is the end of the competition.

The remaining four professionals go on to cook their food for three of the UK’s most discerning restaurant critics. They need to impress William Sitwell, Grace Dent and Jimi Famurewa. The critics’ judgement is unrestrained, often ranging from delight to disdain depending on the food they are served. The chefs are given one hour and 15 minutes to showcase their culinary know-how with a two-course menu designed to dazzle the critics and the judges and keep them in the competition.

Only the three most talented chefs will go through to knockout week and continue in their pursuit of the MasterChef: The Professionals title.