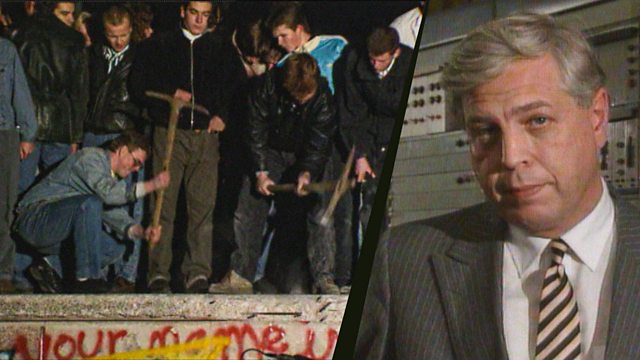 The Fall of the Berlin Wall with John Simpson

Thirty years after the fall of the Berlin Wall, the BBC's John Simpson goes back to examine his reports and consider why history did not turn out quite the way he expected.

It’s said that journalists write the first draft of history. To mark the 30th anniversary of the fall of the Berlin Wall on 9 November 1989, John Simpson, the BBC’s world affairs editor and longest-serving correspondent, goes back to his reports on what he believes is the most important story he ever covered – the collapse of the Berlin Wall.

Back in 1989, John thought this event would change the world for the better, forever. But history has not turned out quite the way he expected. Russia is yet again an enemy of the West, and the Cold War battle that built the Berlin Wall has been replaced with other destabilising global power struggles - even more dangerous and much harder to understand.

Three decades on, John wonders if he was wrong to have been so optimistic. Using the anniversary as an opportunity to re-examine how he told the story, John watches the BBC’s extensive archive and talks with historians and other experts to try and understand just how accurate his reporting was.

At the heart of the documentary is an intense and personal interview with John. He begins by describing how he grew up in the shadow of the Cold War battle between the capitalist West and the communist East, and how he - like everyone else - believed that this global stand-off would continue for many more decades, ending sooner or later in nuclear war.

On 9 November 1989, John, like the rest of the world, in shock at reports that the Berlin Wall’s checkpoints had been opened up, rushed to Berlin to cover the incredible story. With great emotion, John recalls his happiness as he reported from in front of the Wall as Berlin’s people tore it down, until his broadcast was cut off midway by technical failure – giving him by far the most humiliating moment of his long career.

After the technical meltdown, John describes how he walked into the crowd feeling utterly depressed. But, surrounded by the thousands of people who had streamed through the checkpoints from East Berlin, untouched by the once trigger-happy border guards and greeted with delight by West Berliners, he could barely believe his own eyes and found himself overwhelmed with joy.

So, why has the legacy of the Wall not turned out the way John hoped and expected? He examines why he did not predict that the pace of change across Europe would lead to the terrible war in Yugoslavia, nor that Russia, with Vladimir Putin – a former KGB agent – as its president, would find a new guise in which to become a bitter enemy of the West.