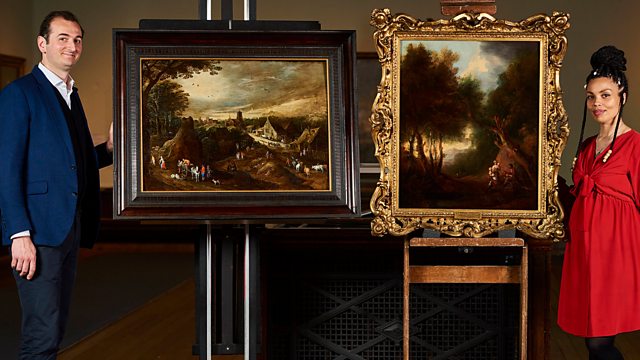 Bendor Grosvenor finds two anonymous planks in a drawer at Birmingham Art Gallery. Put together, they show a scene of village life. Is he right in detecting the hand of Flemish master Brueghel?

The first, a very badly damaged picture whose panel has spilt into two pieces is currently just attributed to the Flemish School rather than any single artist. The second is a forest scene thought to be a copy of a famous painting by Gainsborough.

Dr Bendor Grosvenor believes the damaged painting is by Jan Breughel the Elder, a seminal figure in Antwerp during the 16th century. He believes the second painting is good enough to be by Gainsborough himself. The Flemish landscape tradition was a source of inspiration to Thomas Gainsborough. If these works are, as Bendor suspects, by these two eminent artists, they provide a fascinating, and previously missing, episode in the story of the development of landscape painting in European art.

See all clips from Birmingham (3)