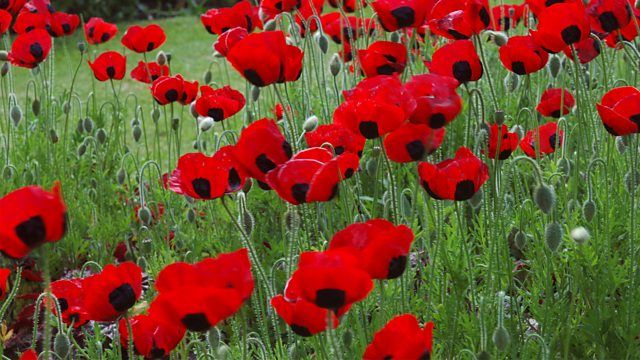 Poppies are associated with many things but to most people they are a symbol of remembrance or associated with the opium trade. Natural Histories examines our fascination with the flower. Lia Leendertz visits the Royal Botanic Gardens Kew where James Wearn shows her a collection of poppy paraphernalia from around the world. Andrew Lack, of Oxford Brookes University and author of Poppy, explains how the flower made its way to the British Isles with the introduction of agriculture, and Joe Crawford of Exeter University describes the popularity of the opium poppy in 19th century Britain, especially among female poets. A vibrant opium trade led British horticulturalists to try and establish a home grown opium crop - without success.
Fiona Stafford appraises the poppy in art encouraging us to look again at Monet's late 19th century painting of a poppy field in northern France. It was painted just a few decades before the outbreak of the Great War which established the red poppy as a permanent reminder of the bloodshed of fallen soldiers.