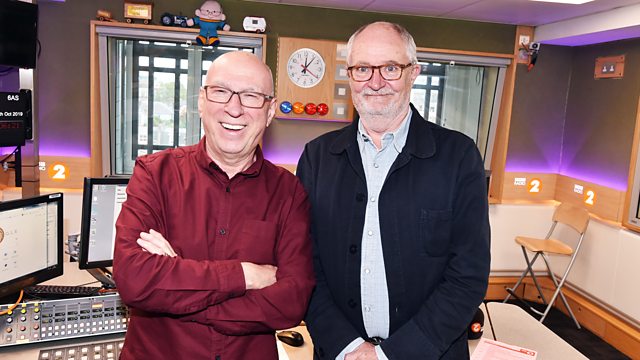 Jeff Lynne's ELO does a live sound check ahead of their performance on Radio 2 In Concert at 7 pm tonight plus PopMaster.

Jeff Lynne's ELO does a live sound check ahead of their performance on Radio 2 In Concert tonight at 7 pm. They'll be mixing some of their best loved tracks with songs from their new album "From Out Of Nowhere".
Jim Broadbent, the multi award winning actor, chooses his Tracks of My Years with songs from Paolo Nutini and Kris Kristofferson. Jim won an Academy Award and a Golden Globe for his role in the movie Iris where he starred alongside Dame Judi Dench. Jim is now part of a brand new album in aid of BBC Children In Need called Got It Covered. It features a glittering line-up of some of the UK’s most critically-acclaimed actors from stage and screen who have banded together to help make a positive difference to the lives of disadvantaged children and young people throughout the UK. Jim has covered Blue Moon by Rogers and Hart and other tracks include Helena Bonham Carter performing Joni Mitchell's Both Sides Now and David Tennant covering Sunshine on Leith by The Proclaimers. Each track was recorded at the legendary recording studios, Abbey Road and Rak Studios in London, whilst the actors received expert guidance and mentoring from Brit and Mercury award-winning record producers and songwriters, Guy Chambers and Jonathan Quarmby. With over 20 years of industry experience, veteran vocal coach Mark De-Lisser also came on board to help the actors produce their tracks. Jim’s list of film credits is hugely varied and includes; Moulin Rouge, Gangs of New York, Bridget Jones, Vera Drake, Paddington, Hot Fuzz and the Harry Potter series.

Jim Broadbent chooses his Tracks of My Years

Jim Broadbent picks his final Tracks of My Years