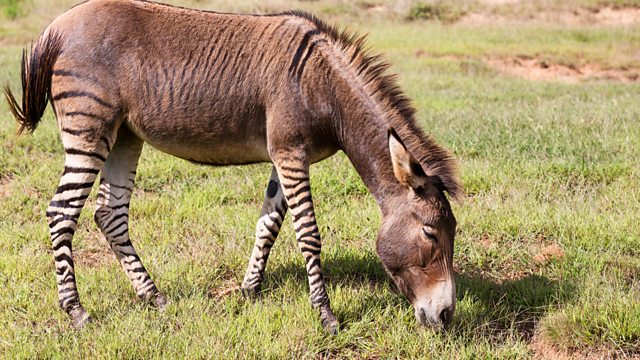 Melvyn Bragg and guests discuss what happens when parents from different species have offspring, despite their genetic differences. In some cases, such as the zebra/donkey hybrid in the image above, the offspring are usually infertile but in others the genetic change can lead to new species with evolutionary advantages. Hybrids can occur naturally, yet most arise from human manipulation and Darwin's study of plant and animal domestication informed his ideas on natural selection.

Nicola Nadeau
Lecturer in Evolutionary Biology at the University of Sheffield

The Treaty of Limerick

Nicola Nadeau at the University of Sheffield

Steve Jones, Almost Like a Whale: The Origin of Species Updated (Black Swan, 2000)

Steve Jones, Here Comes the Sun: How it Feeds us, Kills us, Heals us and Makes us What we are (Little Brown, 2019)

Robin Marantz Henig, A Monk and Two Peas: The Story of Gregor Mendel and the Discovery of Genetics (Weidenfeld & Nicolson, 2000)