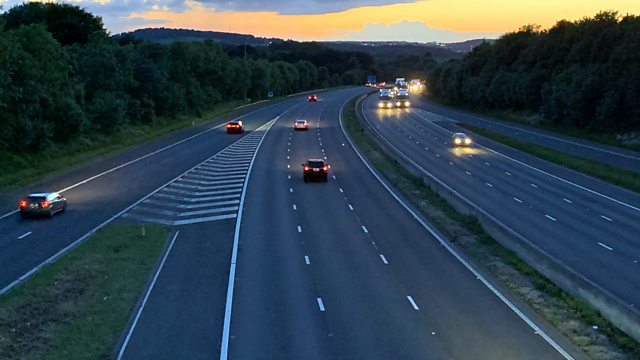 The routines and dramas of a mighty M1 captured in words, sounds and a thrilling new work played by the BBC Philharmonic, as the motorway marks its 60th anniversary.

The dynamic, often dramatic, life of the M1 in words, sounds and a thrilling new work performed by the BBC Philharmonic, as Britain’s first major motorway marks its 60th anniversary.

In a powerful composition specially commissioned by BBC Radio 3, The M1 Symphony depicts how the M1 has transformed the British landscape and millions of lives. A place of routine and drama, where a momentary lapse can change everything, with terrifying speed.

When it was opened 60 years ago, the M1 was truly revolutionary. No roundabouts, no crossroads, no traffic lights, just one continuous road connecting north and south. It dramatically cut traffic jams and journey times.

But from day one, the M1 would extract a high human and environmental cost.

A life-changing collision, an endangered ancient woodland and the soul-destroying frustrations of the daily commute form part of this unique tapestry of new interviews, archive recordings, ambient sounds and original music.