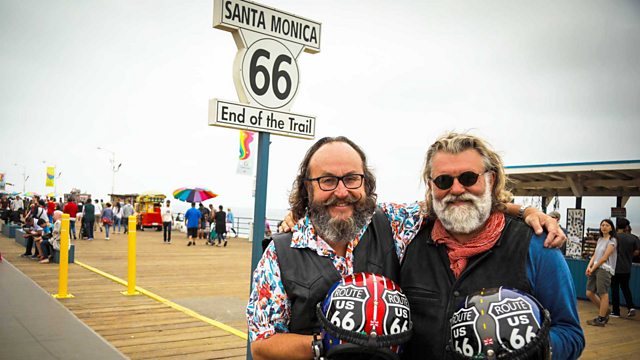 On the last leg of their Route 66 odyssey, the bikers make a small detour to the city of light, Las Vegas, to learn how to make the best mashed potato in the world.

For the last leg of their Route 66 odyssey, the bikers are going west to California, the golden state.

First, they make a small detour to the city of light, Las Vegas. Si and Dave have been invited by one of the youngest executive chefs in the country to learn how to make the best mashed potato in the world. Inspired by their Las Vegas extravaganza they cook the biggest, poshest lobster and prawn cocktail ever seen.

Back on Route 66, they visit the town of Goffs, California, the epicentre of the Wild West, where they learn about the homestead scheme and discover the Mojave Desert. After a long ride through the desert, they arrive in Acton following the path of the 49ers during the gold rush. In an authentic rustic saloon, Si unknowingly eats a very modern burger - a vegan burger served up by Dave. Using one of the saloon’s fruit producers, they cook some mesquite chicken with a fennel and peach salad.

After riding into Los Angeles, the bikers ditch their bikes to try something unique – cooking with marijuana. It is legal in Los Angeles and is the latest culinary trend from La La Land. The following day, they mix with the locals and discover the best tacos they have ever eaten at the biggest LA taco festival. To celebrate the end of their trip, they cook by the beach in Santa Monica a selection of sliders, which are mini burgers. Beef, fish and halloumi, a slider for everyone.

Finally, they ride to the Santa Monica pier to park their bikes and walk to the official end of route 66. Over 3,000 miles across nine states, they have done it - Route 66, the mother road, and what a trip it has been.

See all recipes from Episode 6