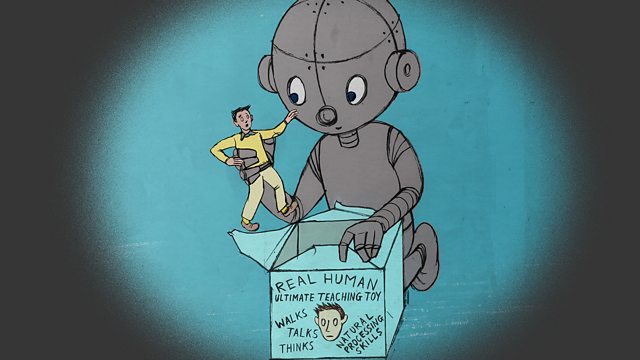 Aleks Krotoski explores our anxieties around AI and automation. Comparing western philosophy to that of the east, she asks if some of our fears around technology are cultural.

Aleks Krotoski explores our anxieties around AI and automation. Comparing western philosophy to that of the east, she'll ask if some of fears around technology are cultural.

Much of western thinking is still strongly influenced by Christian traditions which places humanity at the top of the tree of creation. We rebel against anything that challenges that. Whether it be Galileo telling us we're not the centre of the universe or Darwin telling us we're nothing more than shaved monkeys. It can be argued that the invention of AI is just that sort of challenge to our supremacy. But in Japan they see things very differently; Shintoism leads to a philosophy without the Christian hierarchy. In their 'creation' everything is alive and connected to everything else. Just like the modern digital world.

What can we learn from looking at technology differently.

See all clips from Animism (2)

Dr Tom Chatfield (@TomChatfield) is a British writer, broadcaster and tech philosopher. He explains the classic western philosophical view of our relationship and technology, and questions how we may need to remake ourselves, our environment and even our mythology for a future.

Konstantinos Chatzigeorgiou tutors in both philosophy and statistics as Glasgow University and Glasgow International College. He holds degrees in mechanical engineering, philosophy, and History and Philosophy of Science from Cambridge. He is currently researching the historiography of the scientific revolution, specifically the philosophical background of major 20th-century historical studies on Galileo He tells us how society has dealt with scientific revelations that have challenged the view humanity had of its place in the universe.


Dr. Joel Dudley is currently an Associate Professor of Genetics and Genomic Sciences and Icahn Institute for Data Science and Genomic Technology. Dr. Dudley is also Director of the Institute for Next Generation Healthcare at the Icahn School of Medicine at Mount Sinai.. His work is focused on developing and applying methods to integrate the digital universe of information to build better predictive models of disease, drug response, and scientific wellness.
He tells us about ‘Deep Patient’ and AI in medicine.

Ryan Randazzo is a Business Reporterfor The Arizona Republic and azcentral.com.
He tells us about development and testing of driverless cars in the state since they were first introduced to Arizona, as well as the discomfort of the local people who were suddenly found themselves sharing the roads with autonomous machines.

Claire Trévien is an Anglo-Breton poet who has performed her work internationally, from South Africa to New Orleans. She is the author of  the pamphlet Low-Tide Lottery (Salt, 2011), and two collections The Shipwrecked House (Penned in the Margins, 2013), Astéronymes (Penned in the Margins, 2016), and Brain Fugue (Verve Poetry Press, 2019). She was a module leader on LCCM's Creative and Professional Writing degree. She has now moved back to her native Brittany.

In her poem, Everything’s Haunted, she explores the human reaction to living in a world of thinking machines.

Maholo Uchida, curator of Miraikan (National Museum of Emerging Science and Innovation) in Tokyo and member of the jury of the Prix Ars Electronica. She has curated several exhibitions which bridge art and science, including the 'AI: More than Human' in the Barbican in London.
She tells us about Techno-Animism, and why robots and AI have been able to flow into Japanese Culture, without the anxieties we see in the Western World.