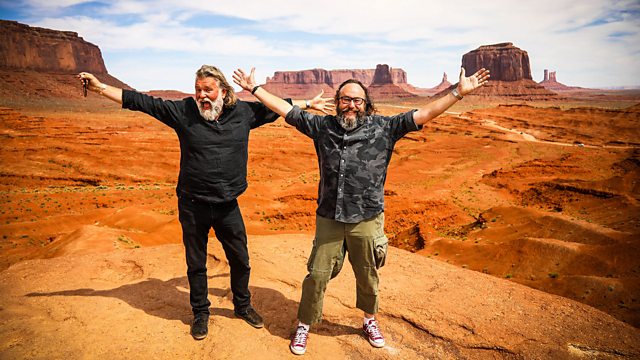 The bikers cross the state of Arizona in search of the Wild West. They are invited to a traditional Navajo barbecue where a sheep is butchered, grilled and eaten alongside some traditional fry bread.

For the fifth leg of this epic adventure, the bikers are crossing the state of Arizona in search of the Wild West. They start by making a small detour from Route 66, starting in Monument Valley to learn more about this striking place and discover the Navajo Nation. First, they enlist some locals to visit the most iconic landscape in the US, which is also a very sacred land for the Navajo.

They are invited by a local Navajo police officer to meet and eat with his family. It is a traditional Navajo barbecue where a sheep is butchered, grilled and eaten alongside some traditional fry bread. Still riding in the Navajo Nation, the bikers stop at Tsaile College to learn more about rodeo, and cook a lamb stew with corn dumplings in homage of the Navajo people they met.

Back on Route 66, they visit an old-fashioned cattle market where they witness the chant or 'cattle rattle' as it is known. A place stuck in time, locals, cowboys and Native Americans come to sell their cattle. Further down the road, the bikers stand in the corner of Winslow Arizona before cooking quesadillas - a staple of the local food.

Riding to Flagstaff, they meet some African killer bees and make some honey. They cook delicious soy-glazed fillets of trout with some chilli garlic bok choy at the arboretum. Later, at the local university, they have a glimpse of the future, meeting a group of student and their food delivery robots. Thanks to the robots, the students can concentrate more with their studies.

The bikers finally end in Seligman, where they meet Angel, the man who saved Route 66. Angel fought for ten long years to get Route 66 recognised as an historic route after it had died from interstate opening.

See all recipes from Episode 5