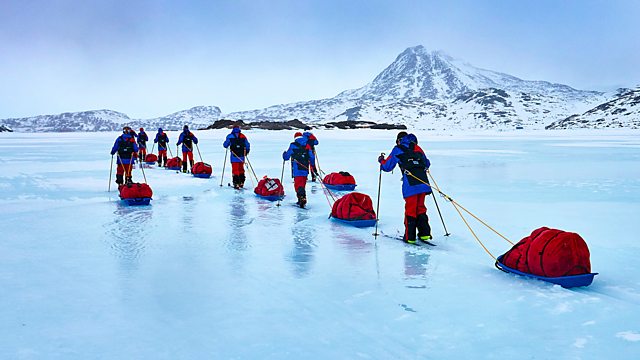 Ten Scottish teenagers chosen for a life-changing expedition to the Arctic embark on a year of tough training to prepare them for the extremes of the polar wilderness.

Craig Mathieson set up Polar Academy to take shy and unaspiring children and turn them into role models. Each year he chooses ten teenagers, lacking in confidence and low on self-esteem, and takes them on a gruelling ten-day expedition to Greenland. Craig was inspired to travel to the South Pole after reading accounts of polar explorers as a boy. In 2006 he took a teenager to the North Pole and saw how his life was transformed.

This year he is working with Bathgate Academy, where 200 pupils signed up for the chance to join the team. From the initial 200, 20 have been selected to be put through a tough training programme before being whittled down to the final ten who will go to Greenland.

Craig is looking for the children who will benefit most from the experience, those who will come back with stories to inspire a whole generation of teenagers. He calls these children 'the invisibles'. Neither the high achievers nor the disrupters, they often pass through school unseen and never get the opportunity to shine.

For a year these children undergo a tough training programme. High-intensity fitness training builds up their strength for the tough expedition ahead. Their next test is at Napier University where they are put into an environmental chamber to simulate the extreme cold temperatures they will face in Greenland. But there is concern for one of the team after she picks up an injury playing football, and doubts over whether she will be fit in time for the expedition.

The teenagers return to Glenmore Lodge to learn navigation skills and camp craft and meet the team who will guide them in Greenland.
Craig has picked some of the country's best mountain guides to keep his team safe. Nigel Williams is an expert on map reading, George MacHardy is a former Royal Marine and mountain expert, Naomi Dodds is the team doctor and an experienced expedition leader, while Mollie Hughes, Craig's newest recruit to the team, is the youngest woman to have climbed Mount Everest from both sides.

The teenagers head out onto the hills and spend two nights high on the Cairngorms, trekking through the hills, pitching camp and climbing to the top of Britain's second highest mountain, Ben Macdui. For most of them it is the first time they have camped in the wild. It is a tough challenge and worsening weather puts the team under pressure.

It’s December, and the ten Bathgate teenagers will be heading to the Arctic in the spring. However, allegations of bullying have led to a last-minute change in the team. Craig calls on one of the reserves with unexpected news to tell him he will be joining the team in Greenland.
As the expedition departure draws near there is time for one more crucial training session. The teenagers spend the day dragging tyres along St Andrews beach to prepare them for the challenge of hauling sledges through the Arctic.

A year ago they were unexceptional teenagers from the middle ground of an ordinary school, invisibles among their classmates. Now they are a team of teenage Arctic explorers ready for anything.

See all episodes from Arctic Academy