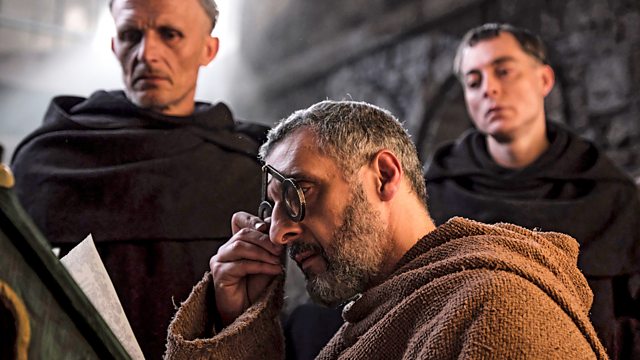 The Name of the Rose Series 1
Episode 1 of 8

In 1327, a Franciscan friar, William of Baskerville, is asked to investigate the unfortunate death of a monk who has fallen or been pushed from the Abbey's parapet.

In 1327 near the city of Pisa, a bloody battle is underway between the Papal and Imperial troops. Adso, a young soldier and son of a German general, wants to become a monk even though his father wants him to be a warrior. He flees in the middle of the night, eventually coming to the gates of Florence where he encounters William of Baskerville, a learned and intelligent English Franciscan friar. Impressed by his determination, William agrees to take him with him as a novice.

The two eventually make their way to a monastery, where they encounter monks in a state of agitation - the dead body of their fellow monk has just been discovered. William investigates the case, where he concludes the monk committed suicide. William is confident in his assumptions until the body of another monk is found under questionable circumstances.

See all episodes from The Name of the Rose