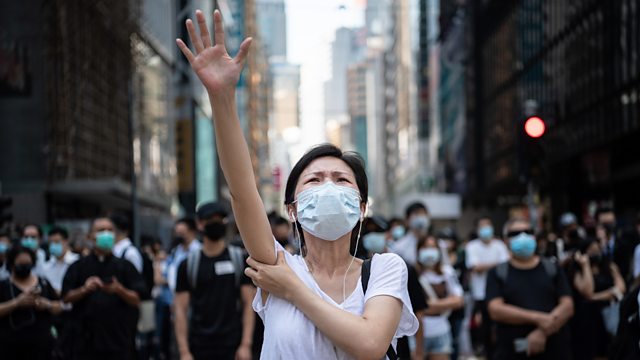 The wedding banquet put on hold by protests and emergency legislation in Hong Kong. Helier Cheung describes how she had to tell 300 guests the party was off.

The wedding banquet put on hold by protests and emergency legislation in Hong Kong. Helier Cheung describes how she had to tell 300 guests the party was off.

It's 250 years since Captain Cook first set foot in New Zealand and the first time the Maori encountered Europeans. That anniversary is being marked this month and this week a replica of Cook's ship, the Endeavour, docked in the small city of Gisborne. But the anniversary has not been universally welcomed, as Colin Peacock reports.

Uganda has had the same man in charge, Yoweri Museveni, since 1986. Challengers for the office of president have come and gone and Mr Museveni has twice changed the rules - on the number of presidential terms and on the maximum presidential age - to ensure his longevity. But now a new challenger has appeared, in the form of a former pop star. Sally Hayden has been on the road with Bobi Wine.

Bear Island - some 250 miles off the northern coast of Norway - is home to a few hardy souls who staff the weather station there. Legend says it got its name from a polar bear spotted swimming nearby in the Barents Sea. But David Baillie says these majestic creatures are few and far between now.

More than 14,000 people in Britain have reached the grand age of 100. One of the perks of this achievement is the traditional message of congratulation from the Queen. In France there are even more centenarians but no similar tradition, no message from the president. Well, not until Nicola Carslaw stepped in.