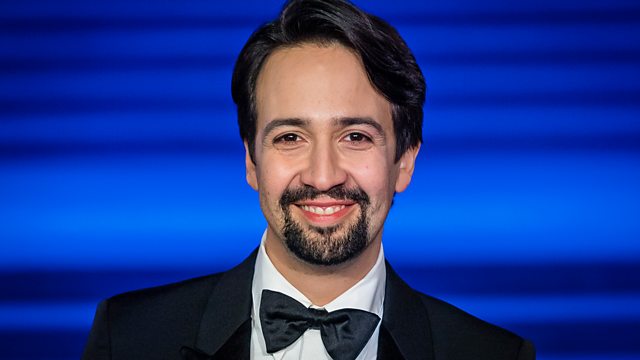 Lin-Manuel Miranda, the creator of the musical Hamilton, shares the eight tracks, book and luxury he'd want to take with him if cast away to a desert island. With Lauren Laverne.

Lin-Manuel Miranda is best known as the composer, lyricist and original star of the multi-award-winning Broadway musical, Hamilton. It won the 2016 Pulitzer Prize in Drama, 11 Tony Awards and Grammy for Best Musical Theatre Album. The London production won seven Olivier Awards in 2018.

Lin-Manuel was brought up in New York by his Puerto Rican parents, and his creativity and sensitivity to music began when he was a child: he performed in Gilbert and Sullivan’s Pirates of Penzance as a teenager and created films using his father’s camcorder. He attended the elite Hunter school for gifted children and spent his summer holidays in Puerto Rico with his extended family.

His first musical, In the Heights, opened on Broadway in 2008, directed by his long-time collaborator, Thomas Kail. It received four Tony Awards including Best Score as well as a Grammy Award for its Original Broadway Cast Album. Among his TV and film acting credits are Fosse/Verdon, Curb Your Enthusiasm and Mary Poppins Returns, and he is currently filming the second series of Philip Pullman’s His Dark Materials for the BBC. He recently collaborated with J.J. Abrams on the song Dobra Doompa, for Star Wars: Episode VII - The Force Awakens and he contributed music, lyrics and vocals to several songs in the Disney animated feature film Moana.

Lin-Manuel supported the relief efforts in Puerto Rico following Hurricane Maria in September 2017, performing Hamilton there and raising funds for arts and culture on the island. He co-founded the hip-hop improv group Freestyle Love Supreme in 2003 and they have just begun a debut run on Broadway.

He lives in New York City with his wife, sons and dog.