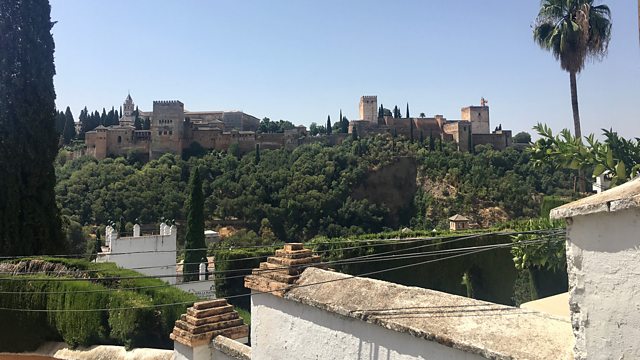 Nights in the Gardens of Spain

Actors Candela Gomez and Khalid Abdalla with readings from Abd Allah ibn al-Simak and Lorca to Sameer Rahim and Victoria Hislop, plus music from Manuel da Falla and Souad Massi.

The Alhambra Palace in Granada is our focus today. The city was home to one of Spain’s greatest poets, Federico Garcia Lorca, from the age of 11 through to his 20s. Field recordings made in Granada combine with music and readings connected to this captivating city, from the epigraphic poems that are written into the very walls of the Alhambra, to the medieval verse of Abd Allah ibn al-Simak, through to the verse and letters of Lorca. Actors Candela Gomez and Khalid Abdalla also read contemporary takes on Granada's Flamenco bars by Victoria Hislop, and a melancholy modern-day visit to the Alhambra from Sameer Rahim's latest novel which considers its imprint of Islamic rule.

The Spanish soundtrack includes Flamenco specially recorded in one of Granada's historic guitar workshops by singer Juan Panilla and guitarist Francisco Manuel Diaz, pieces by that great Andalusian Manuel Da Falla as well as fellow Spaniards Albeniz and Granados, and a song from the Algerian singer Souad Massi who wrote a whole album inspired by the Arab-Andalusian poets. The music melds with the sounds of Granada's fountains, cicadas and birdsong for this special edition of the programme as we transport you to Al-Andalus.

Producer: Georgia Mann. Recordings in Granada made by Robert Winter.