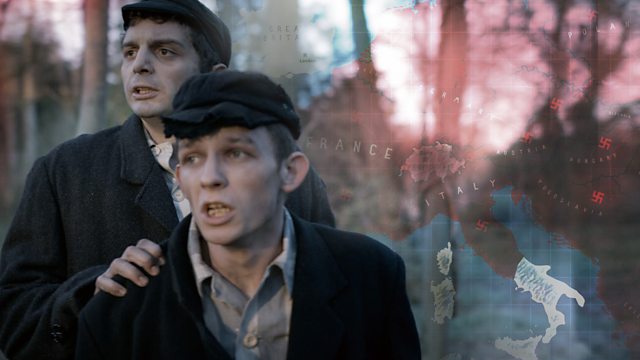 In 1944, two prisoners miraculously escaped from Auschwitz. They told the world of the horror of the Holocaust and raised one of the greatest moral questions of the 20th century.

In April 1944, two Jewish prisoners miraculously escaped from Auschwitz. When they recounted what they had left behind, their harrowing testimony revealed the true horror of the Holocaust to the outside world for the first time. They described in forensic detail the gas chambers and the full extent of the extermination programme. The news they brought presented the Allies with one of the greatest moral questions of the 20th century: Should we bomb Auschwitz?

While the Allies deliberated in London and Washington, the killing machine ground on in southern Poland. One month after the men’s escape, almost 800,000 Hungarian Jews had been rounded up awaiting transport to Auschwitz. By early July 1944, the majority had been transported. Most of them were murdered on arrival.

As the killing at Auschwitz reached its frenzied climax, the outcome of the Second World War hung in the balance. Millions of troops were fighting on both fronts and battling for supremacy in the air. Should the Allies use their resources to push on and win the war or to stop the industrial slaughter at Auschwitz? The request to bomb the camp, with 30,000 captive prisoners, was remarkable and came from a place of utter desperation. But it was a direct response to the destruction of an entire people.

There were operational challenges - was it possible to reach the camp to bomb it? How many heavy bombers would it take? What would the Nazi propaganda machine say about such an attack? - as well as complex moral ones. How many prisoners would likely die in such a raid? Can you kill friendly civilians in order to save the lives of those being transported towards the death camp? These were the hard questions faced by Churchill, Allied Air Command and the Jewish Agency.

For the first time on television, we tell the whole of this incredible story.