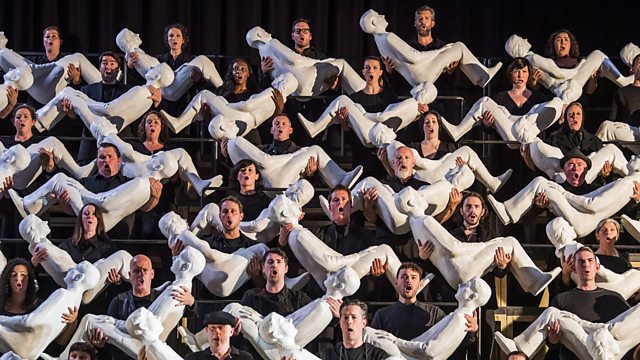 Opera North's new production of Martinu's final opera, The Greek Passion, tells the story of a passion play set on a Greek island, whose community clashes over their response to incoming refugees. With the production striking a topical resonance as part of Opera North's ongoing project as a Theatre of Sanctuary, Tom meets the conductor Garry Walker, director Christopher Alden, and singers Nicky Spence and Lorna James.

Sir Peter Maxwell Davies lived and worked at the heart of his own community on the island of Sanday. To mark his posthumous 85th birthday, Schott Music are publishing 'An Orkney Sketchbook', a collection of four short piano pieces recently discovered on the top of the composer's piano by the conductor Christopher Austin. Huw Watkins has recorded the pieces for broadcast exclusively on Music Matters and Essential Classics (hear them in full on Monday 16th September).

Tom also talks to the American cellist Alisa Weilerstein as she prepares for a run of concerts in the UK, including a performance of Bach's solo cello suites at Bridgewater Hall in Manchester and concerts with the Trondheim Soloists and pianist Inon Barnatan in London. From solo performances to chamber music, Weilerstein's vision is to foster deep relationships with performers and audiences.

And Music Matters has an exclusive view inside Fairfield Halls in Croydon, which re-opens this month after a major three-year refurbishment. With the project's lead architect Magnus Wills, acoustician Anthony Chilton, artistic director Neil Chandler and conductor Jane Glover.