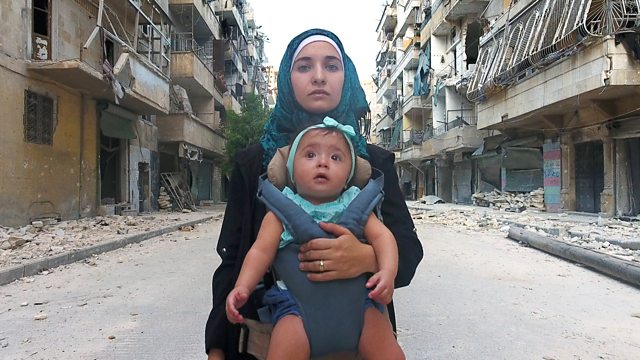 For Sama is a prize-winning documentary by female Syrian filmmaker Waad al-Kateab, recording life in Aleppo for her young daughter who was born shortly after the conflict began there. Film critic Hannah McGill reviews and reports on the winning films at this year's Venice Film Festival.

Lucy Caldwell has been shortlisted for the BBC National Short Story Award with The Children. Her story is about the Victorian social reformer Caroline Norton, who successfully campaigned for women to have the automatic right to have custody of their children in divorce proceedings; and in her story Lucy Caldwell draws parallels with child migrants today who are separated from their mothers. We speak to the author.

British playwright Peter Nichols - A Day In The Death Of Joe Egg, Privates On Parade, Passion Play - has died at the age of 92. Michael Billington joins us to discuss his importance

The Israeli short story writer Etgar Keret discusses his new collection Fly Already, 22 stories – several featuring the surreal and the apocalyptic - which were inspired by a serious car accident he had in America.

The documentary film For Sama is released in the UK on 13 September 2019, certificate 18.

Main image above: Waad and her daughter Sama in Aleppo, Syria

Image to the left: a still of Sama taken from the film For Sama

The Children is one of the 6 stories shortlisted for the BBC/ Cambridge University National Short Story Award (NSSA) 2019.  The other stories on the list are:

The Booker Prize is one of the biggest literary prizes in the world and Front Row is delighted to announce that we’re offering listeners a chance to meet this year’s shortlisted authors to ask them about their shortlisted novel. So if you’re reading, or interested in reading any of the six books – from Margaret Atwood to Salman Rushdie – get in contact.  Tweet us @BBCFrontRow or email frontrow@bbc.co.uk. Let us know which author you’d like to meet and send us one question you’d like to ask.

Fly Already by Etgar Keret is out now as a hardback, an eBook and an Audio Download.

A revival of his play A Day in the Life of Joe Egg opens at the Trafalgar Studios, London on 21 September 2019.