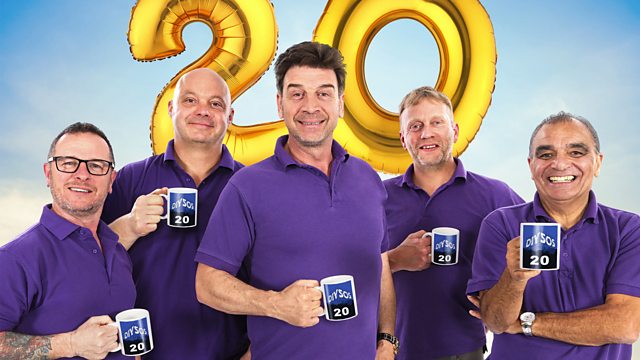 Nick Knowles takes to the road to catch up with families and communities featured on DIY SOS over the last two decades and to find out what happened after the cameras left.

In 2019, DIY SOS marks its 20th year on our screens. BAFTA nominated, the recipient of a Royal Television Society award and of royal participation, it has been and remains the UK’s most community-engaging and loved build series on TV.

In this 20th year celebratory special Nick Knowles takes to the road, to catch up with families and communities to find out what happened after the cameras left. After over 200 episodes, working with over 20,000 trade volunteers, and building homes and community centres worth in excess of £15 million, this episode reveals how these ambitious builds have left a meaningful legacy across the country and changed the lives of thousands of people.

Nick updates viewers on Kyle and Garry in Kent, who adopted four children, three of whom have special needs. In Manchester, site of an entire street renovation, he meets up with military veterans who were housed by DIY SOS. Nick then travels to Edinburgh to visit a Children in Need build for local charity The Yard. In London, he returns to the Grenfell community and checks in with Dale Youth Boxing Club. He also meets up with volunteers from builds across the country who have set up their own versions of DIY SOS, like Band of Builders, a charity that organises volunteer builds for builders who have fallen on hard times, and Hull for Heroes, a veterans charity with ambitious plans to build a mighty Veteran’s Village.

Of course, a 20 year update wouldn’t be complete without exploring some truly engaging archive of Nick and the boys. Comedy clips include Billy accidently blowing himself up, terrified as he dives in a shark tank and performing awesome stunts at a skate park and basketball court. Chris enjoys ice skating; Jules reveals himself as a super hero, potatoman; Mark tastes a massive hotdog; and the team chuck an old bath on Nick, leaving him dumbstruck. There’s also plenty of bellyache build banter, and not forgetting the tears - so many have been shed.

By the end of the journey viewers are left in no doubt that DIY SOS and the volunteers that make it possible have established many lasting legacies all across the UK. DIY SOS offers people the chance to help others and in doing so it brings out the best in people, confirming that Britain is a giving nation.