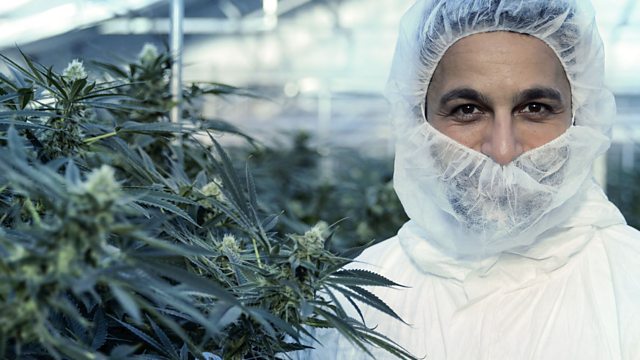 At a pivotal moment in the history of one of the world’s oldest drugs, Dr Javid Abdelmoneim investigates the latest medical and scientific research into the effects of cannabis on the brain and body.

At an extraordinary moment in the history of one of the world’s oldest and most controversial drugs, Horizon investigates the very latest medical and scientific research into the effects of cannabis on the brain and the body.

Medicinal cannabis became legal in the UK on 1 November 2018, but it is still shrouded in controversy. A&E doctor Javid Abdelmoneim wants to find out whether it will help or harm patients.

Javid meets the young epilepsy patient responsible for changing the law around medicinal cannabis in the UK and sees the remarkable effects it has on his condition. He visits a medicinal cannabis farm in Denmark to learn how a company known for growing the recreational drug are now producing medicinal cannabis to be exported all over Europe. He travels to Israel, to find out why they have been using cannabis as a medicine for over 20 years and meets the scientists studying the safety and effectiveness of cannabis in treating pain. And he meets the so-called godfather of cannabis, who at 88 years old is still an active research scientist and considered the world’s leading cannabis expert.

In the UK Javid encounters the first British patient to be prescribed intoxicating herbal cannabis to treat her chronic condition. He meets psychiatrists at King’s College London who reveal their new study linking cannabis more strongly than ever to alarming mental health problems. And he takes part in a groundbreaking trial looking at the effects of the different chemicals in cannabis on the brain.

See all clips from Cannabis: Miracle Medicine or Dangerous Drug? (4)