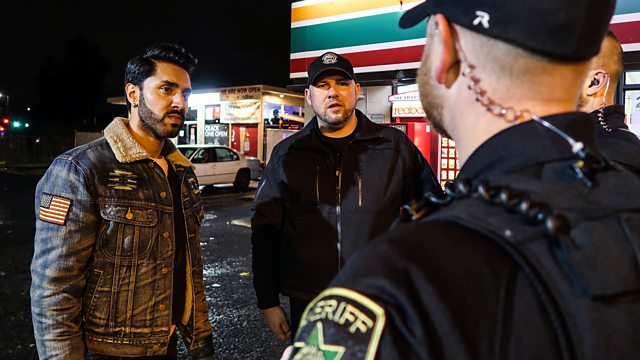 A Black and White Killing: The Case that Shook America Series 1
Episode 1 of 2

Journalist Mobeen Azhar uncovers the truth behind the killing of a black man by a white supremacist gang member. Did Larnell Bruce die because he was black?

It looked like a cold-blooded murder. At midnight outside a convenience store, a white supremacist ran over and killed a young black man in his Jeep, while his girlfriend was heard yelling “Get him baby, get him”. Shortly afterwards, CCTV of the incident went viral and shocked America. Not just because of its brutality, but because of the question at its heart: was he killed because he was black?

In search of an answer to that question, journalist Mobeen Azhar tries to get inside the mind of the killer Russell ‘The Muscle’ Courtier, a member of the notorious white supremacist gang European Kindred. Less a whodunnit than a whydunnit, Mobeen’s journey takes him into a secret world of white supremacists, which provides a virulent back-drop to the trial. And getting to know more about the victim Larnell Bruce as the case unfolds, it soon becomes anything but black and white.

In his debut for BBC Two, British Muslim Mobeen presents a two-part series which unpicks events from every angle. He meets outwardly anti-black extremists, racist neo-nazi skinheads and murderers, uncovering a dark underbelly to the supposedly hipster, liberal city of Portland.

As it turns out, despite its progressive reputation, the state of Oregon was originally created as a white-only ethno-state, which by the 1920s had more Ku Klux Klan members per head than anywhere else. It is a conflicted history with present-day incarnations. In the run-up to the trial there is a spate of swastikas daubed on public buildings and a truck turned into a mobile advert for Nazi beliefs. In response, billboards spring up to alert the public to the existence of 21 white supremacist groups in Oregon. And most dramatically, anti-fascist groups take to the streets and engage in very public mass brawls with alt-right activists.

In this cauldron of hate, Larnell Bruce’s death becomes part of a very public battle, which is about decades of racial tension rather than what happened to one young black man. Mobeen attends the trial on a daily basis, listening to evidence, such as the European Kindred cap that was found at the scene, the gang tattoo on Courtier’s leg, and crucial testimony from eye-witnesses.

With privileged access, Mobeen meets with some of the expert witnesses from court outside of the trial. At every twist and turn he pursues his own investigations, getting to know the families of the defendant and the victim. He visits the crime scene with the lead detective. And critically, he meets with members of the European Kindred gang, that is accused of spawning the white hatred in the first place.

All roads in the investigation eventually lead into the racially-segregated American prison system, which gave birth to European Kindred. In the tradition of large Californian gangs such as Aryan Brotherhood, Courtier’s gang controls the white side of the prison yard. Going behind bars to confront the racist gangs for himself, Mobeen admits that ‘everything I am: a brown-skinned Muslim journalist – is everything they hate…’

Some court cases are important for the legal precedent they set, others for the political reverberations they send out. The case of Russell Courtier is both: a jury is asked to decide, based on circumstantial evidence, how racist were his thoughts as he put his foot on the pedal, while the whole of America – where the scars of racial injustice still run deep – watches and waits for the verdict.

See all episodes from A Black and White Killing: The Case that Shook America 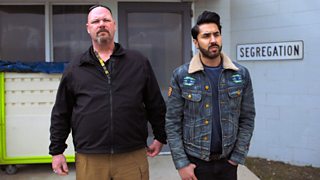 What happened when Mobeen went to America to uncover the truth behind a murder?