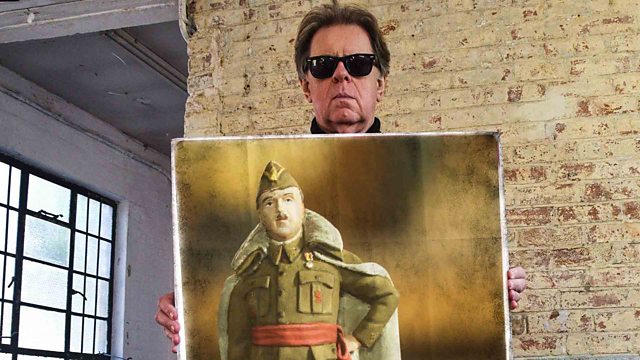 Jonathan Meades completes his quartet on the architecture of European dictators of the 20th century. Franco's architectural legacy was more enduring and surprising than any of the others.

Writer and broadcaster Jonathan Meades has in his time made films about the architecture of the infamous European dictators of the 20th century - Hitler, Stalin and Mussolini. He's now completing the set by turning his gaze onto Spanish dictator Francisco Franco. Franco, unlike the other three, died peacefully in his bed having been in power for 36 years, and his architectural legacy, Meades argues, was more enduring and surprising than any of the others.

In his search for how Franco shaped Spain, Meades doesn’t look in the obvious places. For him Franco's legacy isn’t to be found in the dull and pompous government buildings put up in the 1940s and 50s after the Spanish Civil War but in the riotous clash of building styles of the 1960s and 70s that grew up along Spain's coasts, particularly the proliferation of skyscrapers in resorts such as Benidorm. It’s here that a new type of city was created that has influenced urban development all over the world.

The theme of tourism runs through Meades's excursion into the world of Franco's Spain. Apart from giving the go-ahead to the development of Mediterranean beach resorts to encourage mass tourism, Franco also actively encouraged the revival of the medieval pilgrimage trail to Santiago de Compostela, the north western city named after St James.

Franco cleverly exploited religious belief and myths to bolster his autocratic regime. Central to this was the elevation of the position of St James - the patron saint of Spain. St James the apostle was martyred by King Herod in AD 44. Before that, according to myth, he had brought Christianity to northern Spain, and Santiago de Compostela became the end point of a pilgrim trail in the Middle Ages. Franco revived the pilgrimage. Paradors (luxury hotels sited in ancient monuments), hotels and hostels were built along the various routes to cater for every pocket. Meades shows how St James and Santiago de Compostela became crucial pillars propping up the Franco regime.

Away from the obvious tourist sites, Meades looks at the dark side of Franco's legacy. He uncovers the sinister history of Franco's mausoleum - the Valley of the Fallen - built by republican prisoners of war in the 1940s and 50s. Meades describes it as 'the biggest slave labour project in Europe since World War II'. The building is currently the site of a massive controversy in Spain. The socialist government wants to exhume Franco's body and detoxify the site, while Franco's family strenuously reject any attempt to remove him. The issue remains unresolved to date.

See all clips from Franco Building with Jonathan Meades (3)