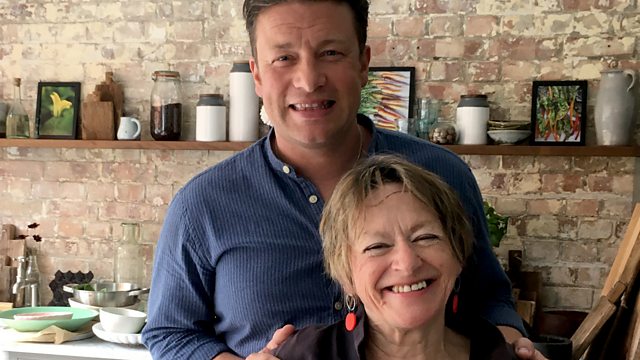 From 'The Naked Chef' to the collapse of 'Jamie's Italian'. Jamie Oliver opens up to Sheila Dillon on his last 2 decades. Part II: Pukka to Parliament

On the anniversary of TV series 'The Naked Chef', Jamie Oliver talks to Sheila Dillon about two controversial decades dominating food on our TV screens and online, our home cooking, and dining out.

In a two-part programme, Jamie describes being propelled into the limelight as 'The Naked Chef'. The charismatic young line chef given an unexpected TV pilot. His decision not to aim for Michelin stars, but to open a training restaurant for young people who wouldn’t have considered a career in catering.

From writing his best-selling books, mainly into a dictaphone due to his Dyslexia, to his relationship with the UK press, and his successes and failings working with a succession of UK governments to get the UK eating healthier.

This is the second part of two programmes on Jamie Oliver's Life Through Food. Part one was broadcast on Sunday 18th August 2019.

Jamie Oliver: A Life Through Food Part I

Taste the Music and Dance