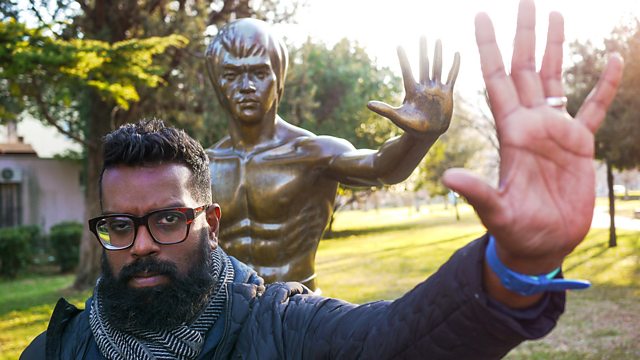 The Misadventures of Romesh Ranganathan Series 2
Episode 3 of 4

In Bosnia and Herzegovina, Rom meets the Bosnian who claims to have discovered the world’s largest pyramid and stays overnight in a 'war hostel'.

Bosnia and Herzegovina, in the mind of Romesh, is a place inextricably linked with war. He had never even heard the word Bosnia until the war broke out and finds it hard to conjure any other images when he thinks about the country now. But is there more to Bosnia than bombs and bullet holes?

Rom is met at the airport by local guide and museum curator Skender Hatibovic, who shows him around this small corner of eastern Europe. Over the next week he slides down a mountain on his arse at a world-class ski resort, stays overnight in a 'war hostel' and meets the Bosnian who claims to have discovered the world’s largest pyramid. He tries out Sarajevo's abandoned bobsleigh track – a remnant of the 1984 Winter Olympics which were held in the city - and samples far too much delicious award-winning wine. But does he have the courage to emulate the famous Mostar divers and throw himself off the country’s iconic Stari Most Bridge?