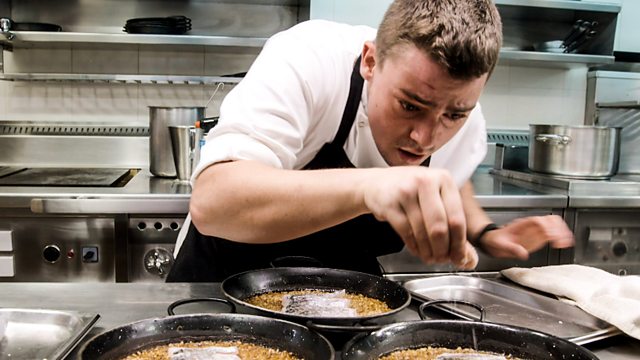 The Chefs' Brigade Series 1
Episode 3 of 6

After the results of the previous week, Jason has his eye on several of the team who will need to work hard to show they deserve to keep their places in the brigade.

The brigade’s next stop is Cadiz in Andalusia in southern Spain. Jason worries that winning their first service back in Italy made his brigade over-confident, so he, Dale and Andy decide to get back to basics with the them.

The ancient coastal city of Cadiz has a long association with fishing and seafood, and the need for precision and delicacy when cooking with fish is a great testing ground for Jason to further train and develop his chefs.

The rival restaurant has been owned by the same family for more than 50 years and is a mainstay of Cadiz cuisine, adored by locals and tourists alike for their traditional dishes. Jason must teach his brigade to appreciate the traditions of the region, and local fisherman Jorge takes them to the ancient Esteros salt flats that have provided fish and seafood to Cadiz residents for thousands of years.

After an outburst last week, Jason has his eye on 22-year-old Frankie, and following an appalling final service in Norway, fish restaurant chef Stephen has a mountain to climb to win back Jason’s trust. 37-year-old chef Kareem isn’t progressing as Jason had hoped and must prove he has what it takes to strengthen the brigade.

See all episodes from The Chefs' Brigade