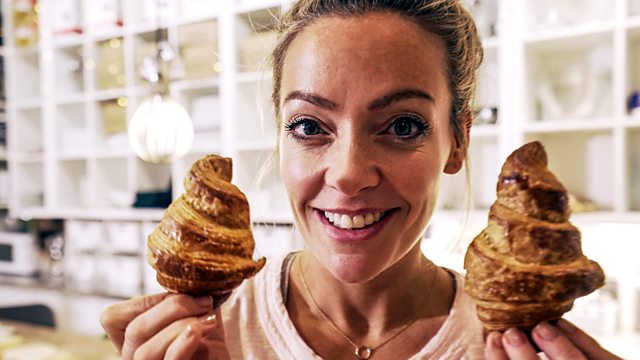 Gregg Wallace is in France at an enormous croissant factory where they produce 336,000 flaky pastries a day.

Gregg Wallace is in France at an enormous croissant factory where they produce 336,000 of the flaky pastries every day. He follows the production of croissants from the arrival of 21 tonnes of butter right through to dispatch. Along the way he learns how they use an 83-year-old strain of yeast to pack a flavourful punch and discovers the secret of pastry lamination. They layer very thin slices of butter between sheets of dough to create the famous flaky pastry.

Meanwhile, Cherry Healey is testing the best way to eat a croissant. With the help of a professor who specialises in the science of our senses, she discovers that there is an optimum way to consume them. Ideally, they will be served warm so that the butter inside oozes fat into the pastry, smothered in jam to give a sugar and fat hit, and eaten from a paper bag so that the crinkly sound accentuates the flaky texture of the pastry. She also heads to north Wales, visiting a farm and dairy where they produce a special type of ‘concentrated’ butter. The butter is a whopping 99.8% fat, perfect for producing croissants with a long shelf life.

Historian Ruth Goodman is in Paris investigating the croissant’s surprising Austrian origins. It is thought that it originated with a pastry called a kipferl, which Austrian bakers invented in the 17th century to commemorate a heroic victory over the armies of the Ottoman Empire. Its shape was a mocking reference to the crescent on their enemy’s flag. But it took a while to transform into the modern pastry - the earliest written recipe she manages to find for a modern French croissant comes as late as 1906. Ruth also discovers that bread played a vital role in the French Revolution.