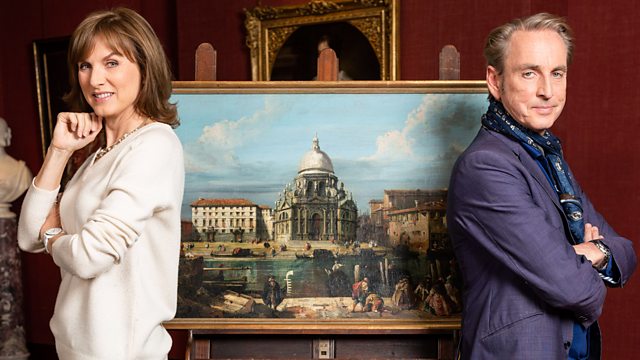 Fake or Fortune? Series 8
Episode 4 of 4

The team investigates a beautiful 18th-century Venetian view. Could this be a work by one of the Italian masters, either Francesco Guardi or Michele Marieschi?

In this episode, Philip and Fiona investigate a highly desirable Venetian view. It was inherited by owner Nick Hopkinson from his great-grandfather, Meyer Spielman. Nick grew up with the painting and has always loved it, but there’s a mystery about it that he would love to solve. On the back of the painting there are two labels from the Royal Academy – one names the artist as Marieschi and the other as Guardi. Nick has long wondered whose hand was behind one of his most treasured belongings, and how he has contacted the Fake or Fortune? team for help.

Francesco Guardi and Michele Marieschi are both known for their paintings of Venetian views and were contemporaries in the 18th century of the most famous view painter of them all, Canaletto. But there’s a big difference in value between them: if Nick’s painting is a Marieschi it could be worth £500,000, but if it’s a Guardi it could be worth up to £10 million.

With such high stakes, Philip and Fiona get to work. On a trip to Venice they learn that when it comes to attribution, even in the 18th century confusion reigned. There was such a huge demand for Venetian views that artists churned them out, often from workshops with apprentices or other artists filling in details such as the figures, and they rarely signed their paintings. At the Art Academy archives in Venice, Fiona and Nick look at a document that details a sort of 18th-century version of Fake or Fortune? A committee tried to establish who painted a picture, with some familiar names being debated – Canaletto is mentioned, as are Marieschi and Guardi. At that time, Guardi was still alive and so was brought in to verify the identity of the painting. Centuries later, Fiona and Philip will have to follow the clues in the painting itself to solve this mystery.

Back in London, Philip compares Nick’s painting to other known works by both Marieschi and Guardi and decides that stylistically, it’s far closer to Marieschi than Guardi. On the provenance trail, Fiona and Nick head to the Royal Academy to see if they can find out any more about the labels on the back of the painting. There, they make a shocking discovery that puts an even bigger question mark over Guardi’s name. It’s the first of several family stories that Nick discovers aren’t quite as he thought.

With Guardi in doubt, the team turn their attention to Marieschi. The view in the picture is one that Marieschi often depicted, which is encouraging, but it does also raise the possibility that this is a copy. The demand for these highly desirable Venetian views was so high that in the late 18th and 19th centuries the market was flooded with fakes and copies. A factory was even opened in London churning out what were known as ‘Canaletti’. We are entering murky waters and there’s a worrying prospect that Nick’s picture could turn out to be neither a Guardi nor a Marieschi but a fake, so the picture is analysed using a revolutionary new piece of imaging technology called Artmyn. A scanner takes 20,000 photographs, mapping the surface of the picture and revealing in minute detail how the paint has been applied. Such insights could be crucial in distinguishing a genuine Marieschi from a copy.

There is one more lead to follow up – an intriguing seal on the back of the painting that says ‘Firenze’. Could this place the painting in Italy in the 18th and 19th century and rule out the possibility of it being an English fake?

See all clips from A Venetian View (3)